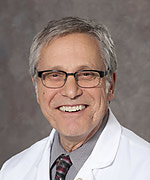 He is also interested in delivery of health care to people with chronic metabolic diseases, including diabetes, hypertension, and osteoporosis.

Dr. Swislocki is board-certified in Internal Medicine and Endocrinology and Metabolism. His practice is by referral and almost entirely clinic-based.

His primary interest is in disorders of insulin resistance, such as hypertension, diabetes, and diabetes complications, but he is also interested in caring for patients with chronic metabolic diseases such as obesity and osteoporosis, as well as more general endocrinologic disorders.

Dr. Swislocki is currently a member of the VA VISN 21 Endocrine Task Force addressing appropriate goals of therapy, and safety issues, for diabetes and male hypogonadism, and other endocrine and metabolic disorders.

American Board of Endocrinology, Diabetes and Metabolism, 1989

American Board of Internal Medicine, 1982

Recognition as an "Outstanding Reviewer," by the Editor, Annals of Internal Medicine, 2009

Recognition as an "Outstanding Reviewer," by the Editor, Annals of Internal Medicine, 2008

Holman, R., B. Park, T. Slade, Tyler, M. Murdock, K. Rodnick, and A. Swislocki. A biochemistry question-guided derivation of a potential mechanism for HbA1c formation in diabetes mellitus leading to a data-driven clinical diagnosis. The Journal of Chemical Education. 2016.

Swislocki, A., and I. Jialal. Perspective:  The Novel Role of the Kidney in Diabetes Management:  SGLT-2 Inhibitors. Metabolic Syndrome and Related Disorders, 2015;13:287-91.