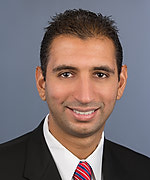 I believe in patient-centered care where the physician and patient work together to accomplish a desired goal.

Dr. Warda is fellowship trained in Female Pelvic Medicine and Reconstructive Surgery. He offers care for patients with pelvic disorders such as pelvic organ prolapse, urinary incontinence and defecatory dysfunction.

He has a special interest in minimally invasive surgery, robotic surgery, mid-urethral slings, Botox injection in the bladder and InterStim therapy. He is active in resident and medical student teaching and research.

American Board of Obstetrics and Gynecology - Diplomate, 2017

American Board of Obstetrics and Gynecology � Female Pelvic Medicine and Reconstructive Surgery,

Warda H. A trial placement of a prophylactic ureteral catheter during the excision of a huge pelvic mass with incidental cystotomy. Central European Journal of Urology. 2012;66(3):372-376.