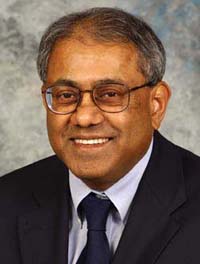 Ishwarlal Jialal, UC Davis professor of internal medicine, has been selected by the American College for Advancement in Medicine to receive the Linus Pauling Award for notable achievement in the field of Integrative Medicine.

Jialal, who also is the Robert E. Stowell Endowed Chair in Experimental Pathology and director of the Laboratory for Atherosclerosis and Metabolic Research, received the award at the college's Spring 2008 Conference in Orlando, Fla.

"We are pleased to recognize Dr. Jialal's extensive and groundbreaking research with vitamin E and vascular disease," said Jeanne Drisko, the association's president.

Pauling was arguably one of the greatest scientists of the 20th century. He described the nature of the chemical bond, leading to the discovery of the double helix structure of DNA. He is the only person to have won two unshared Nobel Prizes. He was later fascinated by vitamin C and the use of high-dose nutrients in the treatment of diseases, including cold and flu viruses, cancer, and heart disease, and he coined the term 'orthomolecular medicine' to describe the use of correct molecular balance to treat and prevent disease with dietary supplements. He founded the Linus Pauling Institute, which continues his biomedical research legacy.

Jialal has published over 350 original papers and invited reviews in the areas of diabetes, atherosclerosis, lipid metabolism, nutrition and vascular biology. He has received numerous awards for his research, and has served on the editorial boards of numerous journals, including American Journal of Clinical Nutrition, Journal of Molecular and Cellular Cardiology and Atherosclerosis. Currently, Jialal serves as section editor of the American Journal of Clinical Pathology for Clinical Chemistry and editor-in-chief of Metabolic Syndrome and Related Disorders.

The American College for Advancement in Medicine is a not-for-profit medical society dedicated to educating physicians and other health care professionals on the latest findings and emerging procedures in preventive/nutritional medicine. The organization's goals are to improve skills, knowledge and diagnostic procedures as they relate to complementary and alternative medicine, to support research, and to develop awareness of alternative methods of medical treatment.

Celebrating more than a quarter century of service, the college represents more than 1,000 physicians in 30 countries. It is the largest and oldest organization of its kind in the world dedicated exclusively to serving the educational needs of the health professions. For more information, visit www.acam.org.

UC Davis Health System is an academic medical center that includes a top-ranked school of medicine, a 577-bed acute care hospital, the proposed Betty Irene Moore School of Nursing, a National Cancer Institute-designated cancer center, the unique M.I.N.D. Institute for the study of neurodevelopmental disorders, a comprehensive children's hospital, a level 1 trauma center and outpatient clinics in communities throughout the Sacramento region. Consistently ranked among the nation's top medical schools and best hospitals, UC Davis has established itself as a national leader in telehealth, rural medicine, cancer, neurodevelopmental disorders, vascular medicine, and trauma and emergency medicine. Other areas of research strength include clinical and translational science, regenerative medicine, infectious disease, neuroscience, functional genomics and mouse biology, comparative medicine and nutrition, among many others.

that it helps encourage a fair number of smokers to consider kicking the habit. It's exactly what we'd like to see with this initiative, so it is important that we give everyone the support and opportunities they need to do just that."
— Ralph deVere White, UC Davis Cancer Center director