Checkup on Health: When is anxiety a clinical condition? 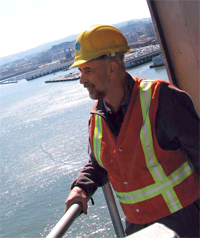 In the 1980s, John Schmidt fearlessly climbed on the San Francisco Bay Bridge and even helped repair it after the Loma Prieta earthquake. Yet getting into an elevator petrified the electrical engineer.

"I'd be with a group and I could not get in the elevator with them; I'd make up a reason to take the stairs," he recalls. "It got pretty embarrassing."

Schmidt couldn't do many of the things most people did everyday. He was often so afraid of dying that he had trouble sleeping at night and couldn't board an airplane. He sometimes became so dizzy that he collapsed at the office and was rushed to the hospital.

Occasional anxiety is part of life for most people. It can be a normal response to risky situations, stress or uncertainty. However, anxiety can sometimes be a sign of an anxiety disorder, a condition that may benefit from specific treatments.

There are currently five anxiety disorders recognized as distinct diagnoses: panic disorder, social anxiety disorder, obsessive compulsive disorder, post-traumatic stress disorder, and generalized anxiety disorder. Each disorder appears to have different causes. Ongoing scientific research is trying to understand what causes each of these conditions, as well as trying to demonstrate new treatments that are effective.

Current research at UC Davis Medical Center focuses on a metabolic abnormality observed in the brains of patients who suffer from panic disorder. Patients with panic disorder accumulate higher levels of lactate acid in their brains during ordinary mental activity. Lactic acid is known to trigger panic attacks. If lactic acid is causing some patients to have panic attacks, it may be possible to develop treatments that specifically correct this abnormality.

How can you tell if your anxiety is normal or a sign of an anxiety disorder?

CBT or cognitive therapy is a type of psychotherapy that focuses on the specific symptoms a patient has right now, rather than focusing on the patient’s childhood or stressful events from the past. CBT teaches the patient ways of changing some of the thinking patterns and behavior patterns that contribute to the anxiety.

Dr. Maddock is a professor in the UC Davis Department of Psychiatry and Behavioral Sciences and an expert in the pathophysiology and treatment of anxiety and mood disorders.

The Anxiety Disorders Association of America offers tips for dealing with financial anxiety.

November 2008 — Patients are needed for a UC Davis study that seeks to advance understanding of the physiological causes of panic disorder. The study uses brain scans to study amounts of brain lactate, and seeks both people who currently experience panic disorder and those who are in remission. For information, call (916) 734-7732.