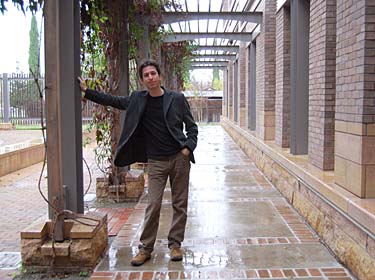 Giacomo Vivanti, a postdoctoral researcher at the M.I.N.D. Institute and the study’s lead author.

A study by researchers at the UC Davis M.I.N.D. Institute has discovered an important clue to why children with autism spectrum disorders have trouble imitating others: They spend less time looking at the faces of people who are modeling new skills.

The study was conducted using high-technology eye-tracking headgear and software that measures with precision the point at which a child is looking when learning a task. Researchers used an actor to demonstrate a task on a computer screen.

“We found that the children with autism focused on the demonstrator’s action and looked at the demonstrator’s face much less often than did typically developing children,” said Giacomo Vivanti, a postdoctoral researcher at the M.I.N.D. Institute and the study’s lead author.

Imitation plays an important role in how children learn, as well as in how people interact socially, said M.I.N.D. Institute researcher and senior study author Sally J. Rogers, who has been studying imitation impairment and autism for more than 20 years.

“This is a trait we see as early as we can diagnose autism, and it’s one of the traits that is present even in mildly impaired adults,” Rogers said.

Impaired imitation leads to additional impairments in sharing emotions, pretend play, pragmatic communication and understanding the emotional states of others. For years, scientists thought that children with autism and related disorders had trouble with learning through imitation because they had poor motor skills or because they did not pay attention to the action being performed. The current study rules out these hypotheses.

“We now understand more about how this imitation deficit might be working and, after more study, we may actually be able to address it in a way that helps children with autism develop a more natural set of behaviors,” said Rogers, a UC Davis professor of psychiatry and behavioral sciences.

“It could be that if people with autism could be better at reading emotion they might naturally start to imitate their models the way like other people do.”
—Sally Rogers, professor of psychiatry and behavioral sciences

In the current study, which was published online in June and appeared in print in November in the Journal of Experimental Child Psychology, 18 children aged 8 to 15 with high-functioning autism were carefully matched with a group of 13 typically developing children. While wearing special eye-tracking headgear, the children were shown video clips that ranged from seven to 19 seconds in length.

After viewing each clip, the children performed the demonstrated action. The results confirm previous research that shows that children with autism have difficulty imitating tasks when compared to normally developing children. It also showed that children with autism paid just as much attention to the action being performed as the other children in the study, ruling out previous hypotheses about poor attention to the task.

“This finding is particularly important,” Rogers said. “Now we can rule out this variable. We know these children are looking at the task.”

Researchers also found that successful performance of a task by children with autism increases with the amount of time they study it but is not correlated with their basic motor skills, ruling out the possibility that it is a lack of motor ability causing the imitation effect.

Finally, the study showed that both groups of children shifted their attention from the action to the demonstrator’s face, but the children with autism did this much less often.

According to Rogers, this finding suggests that imitation is not just about repeating an action, but understanding the reason for the action.

“That information is conveyed in our faces,” she explained.

Rogers and Vivanti are continuing to try to understand how this difference in looking at faces affects more complex forms of learning and understanding.

“We are looking at how children look at emotions and intentions that are conveyed in a demonstrator’s face and how looking at this information in faces or not looking at them may affect how they understand and imitate the observed actions,” Vivanti said.

Based on these studies, Vivanti and Rogers hope to one day develop studies aimed at determining whether or not face-looking is an important part of the imitation process.

“It could be that if people with autism could be better at reading emotion they might naturally start to imitate their models the way like other people do,” Rogers said. “If it’s about how people understand the information in a face, then it gives you a target for intervention.”

The UC Davis M.I.N.D. Institute, in Sacramento, Calif., was founded in 1998 as a unique interdisciplinary research center where parents, community leaders, researchers, clinicians and volunteers collaborate to study and treat autism and other neurodevelopmental disorders. More information about the institute is available on the Web at http://www.ucdmc.ucdavis.edu/mindinstitute/.