A metabolic defect may be the key to crippling pancreatic cancer 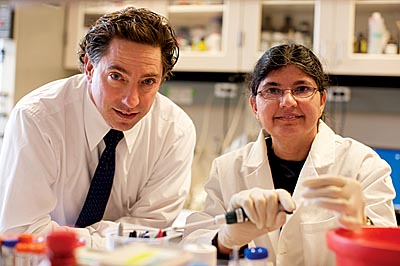 Richard Bold is motivated by challenge. He specializes in treating one of the deadliest cancers with one of the most difficult surgeries to perform. Yet he is frustrated by the limited treatment options for his patients with pancreatic cancer.

"There have been very few significant advances in years of testing chemotherapies for pancreatic cancer," he says. "There is a dire need for new options, and we have to turn to basic science to come up with those options."

Since arriving at UC Davis a decade ago, Bold has performed surgeries on pancreatic cancer patients while simultaneously conducting research to discover better treatments for the disease. That work is now paying off.

Bold and his collaborators recently found that pancreatic cancer cells can lack an important enzyme that helps synthesize arginine — an amino acid with an essential role in cell division, immune function and hormone regulation. In a study published in the October 2008 issue of the International Journal of Cancer, they showed that arginine deprivation could cut cancer-cell proliferation in half.

"While our findings do not suggest a cure for pancreatic cancer, they do promise a possible way to extend the life expectancies of those diagnosed with it," Bold says. 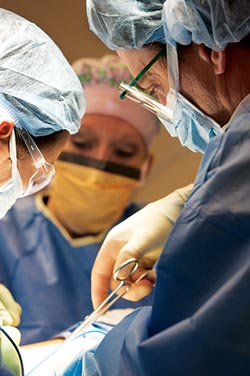 Since arriving at UC Davis a decade ago, Bold has performed surgeries on pancreatic cancer patients while simultaneously conducting research to discover better treatments for the disease.

His discovery began when he learned that arginine deprivation showed promise in laboratory studies of melanoma and liver cancer, two other cancers with limited treatment options. He decided to measure levels of argininosuccinate synthetase — the enzyme required to synthesize arginine — in human pancreatic tumor cells. The enzyme was not detected in 87 percent of 47 tumor specimens, suggesting that most pancreatic cancer cells require arginine to prosper.

"Instead of killing cells with typical chemotherapy, we removed one of the key building blocks that cancer cells need, combining this approach with existing surgical treatment holds great promise for increasing survival rates of people with pancreatic cancer."
— Richard Bold

"Pancreatic cancer, biologically, has nothing in common with other cancers that lack argininosuccinate synthetase," Bold explains. "But we still were curious to find out if arginine deprivation could have an effect on pancreatic cancer. We were very lucky. It did."

The researchers then depleted arginine in pancreatic cell lines by exposing them to arginine deiminase, an enzyme isolated from the organism Mycoplasma known to cell biologists as a "nightmare." Cell cultures exposed to the infectious organism quickly die from a lack of arginine. Using purified recombinant arginine deiminase, Bold's group showed that pancreatic cancer cell proliferation was reduced by 50 percent.

Next, the team treated mice that had pancreatic tumors with a version of arginine deiminase modified to increase size and circulatory time. There was an identical result: a 50 percent reduction in tumor growth.

A new kind of cancer treatment

According to Bold, the outcome represented a unique approach to cancer treatment. It was one of the first to identify a metabolic pathway that can be leveraged to interrupt cancer.

"Instead of killing cells with typical chemotherapy, we removed one of the key building blocks that cancer cells need to function and they can't create on their own," Bold says. "Combining this approach with existing surgical treatment holds great promise for increasing survival rates of people with pancreatic cancer." 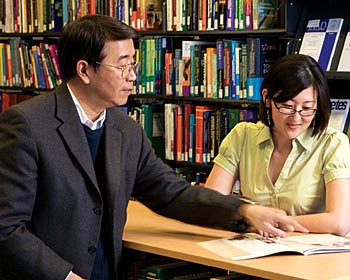 Working with Bold's team, Hsing-Jien Kung (pictured above, left, with researcher Randie Kim) found that arginine deprivation can destroy cancer cells. "The cell literally begins to eat itself," he said.

Hsing-Jien Kung, director of basic science at the cancer center and an international leader in cancer biology, was Bold's collaborator on the pancreatic and prostate cancer studies. Kung — together with Ph.D./M.D. candidate Randie Kim — discovered the mechanism by which arginine deprivation works, a first-ever finding published as part of the prostate cancer paper.

Kung hypothesized that, because arginine deprivation is a form of metabolic stress, a different kind of cell death might be at work. Together with Bold's group, Kung's lab discovered that arginine deprivation triggers autophagy — or self-eating — a process in which cellular organelles become encapsulated by digestive enzyme-containing lysosomes.

"The cell literally begins to eat itself. This is the first time we have seen this method of cellular destruction in prostate cancer cells," Kung says.

"Our thought is that if you prolong arginine deprivation treatment then you promote both mechanisms of cell death," Kung says. "Arginine deprivation could be a wonderful adjunctive therapy that would allow us to lower the doses of current drugs that can have debilitating side effects

Bold and Kung are now conducting laboratory studies on arginine deprivation therapy in conjunction with other agents for treating pancreatic and prostate cancer. They will then look for ways to increase the sensitivity of cancer cells to arginine deprivation.

"This additional research is needed to inform the clinical work and move it forward more quickly," Bold says.

Synthesis covers the latest in cancer treatment, research and patient care programs from UC Davis Cancer Center. The current issue features new insights on sex hormones and cancer, how bone enzymes could be a key to tracking prostate cancer treatments, an innovative program to support women through the first months after a breast-cancer diagnosis, and more. To request a copy, e-mail doreen.purvis@ucdmc.ucdavis.edu.

The researchers have also begun designing human clinical trials in cooperation with the manufacturer of the modified arginine deiminase. They are collaborating on other arginine deiminase clinical trials, including a phase II study of melanoma, a phase II study for liver cancer and a phase III liver cancer trial. Human trials for prostate and pancreatic cancer will take some time to launch as they involve combined therapies and require additional lab work.

According to Bold, skin, liver, prostate and pancreatic cancers have little in common other than a lack of argininosuccinate synthetase. So far, no other cancers have shown this metabolic deficiency.

"As far as we can tell, we are not going to be able to use arginine deprivation for all types of cancer," he says.

Bold knew early in his career that this was the kind of work he wanted to do. As a surgeon-in-training, he saw pancreatic cancer patients who were eligible for but not getting surgery because of their prognosis. Bold realized the only way he was going to improve his patients' survival was to find more effective post-surgery treatments.

"This is a terrible disease and few people are trying to find cures," Bold says. "I took it on as a challenge so that someday we can give people with pancreatic cancer that chance. Now, I can say that that is a real possibility."