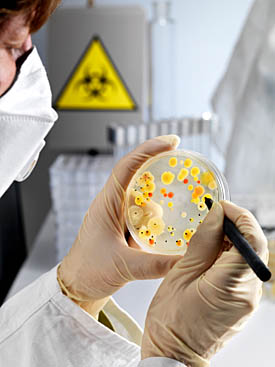 Amyloid plaques, bacteria biofilm both cause inflammation that destroys neurons

In a study published in the July issue of the journal Cell Host & Microbe, UC Davis researchers report that both amyloid plaques found in the brains of Alzheimer’s patients and structures made by some gut bacteria likely elicit the same response by human immune cells.

“Alzheimer’s disease may be a case of mistaken identity,” said Andreas Bäumler, a professor of microbiology and medical immunology. Bäumler and his colleagues showed that the immune systems of mice injected with E. coli and salmonella are triggered by curli fibrils, fiber-like structures consisting of curli proteins that allow bacteria to stick to host tissue and to each other and form colonies.

Curli fibrils are morphologically identical to amyloid fibrils found in Alzheimer’s plaques. When they presented human cells with the two kinds of fibrils, they saw the same immune response — even though the two have nothing in common in their amino acid sequences.

“Our results suggest that it’s the structure of these protein aggregates that matter and that, to the innate immune system, Alzheimer’s plaques may look like colonies of bacteria. This would result in the chronic inflammation we see in Alzheimer’s disease that damages neurons,” Bäumler explained.

Amyloid plaques are the sticky buildup of proteins that accumulate outside nerve cells. They are characteristic of several illnesses, including Alzheimer’s disease, Huntington’s disease, type 2 diabetes, secondary amyloidosis and prion diseases, like Creutzfeldt-Jakob (the human form of mad cow disease). These diseases all involve marked inflammation at the sites of amyloid deposition, resulting in tissue injury.

“When we destroyed the ability of the proteins to aggregate, we no longer saw the same immune response.”
— Andreas Bäumler

The protein forming plaques in Alzheimer’s patients is normally soluble. When the protein folds improperly, it forms amyloid deposits that are associated with brain inflammation. Until now, scientists have not been able to identify what causes this destructive, chronic inflammation.

Bäumler and his colleagues did not expect to be studying Alzheimer’s disease. They were studying inflammation of the gut caused by bacteria when they discovered that the innate immune system was being triggered by a structural feature of bacterial amyloids and not by the amino acids that make up the proteins in the biofilms.

“When we destroyed the ability of the proteins to aggregate, we no longer saw the same immune response,” Bäumler said.

When the researchers figured out the amyloid structure was responsible for triggering the immune system, they decided to see whether the same immune response was being triggered by structurally identical amyloids associated with human disease. They chose to study the synthetic form of the proteins that make up Alzheimer’s plaques because the disease has been widely studied and a lot is known about the biochemistry of these plaques.

In the current study, Bäumler and his team found that, in mice, the immune response to curli fibrils is controlled by a protein called TLR-2 (Toll-like receptor 2). TLR-2 is expressed on the surface of certain cells that recognize foreign substances and passes on appropriate signals to the cells of the immune system.

Next, the team used cultures of human immune system cells to see if synthetic versions of the major curli fibril protein (CsgA) and the major protein found in amyloid plaques, (beta-amyloid) would trigger the TLR-2 response. They used cultures of macrophage cells, immune cells that engulf and digest cellular debris and pathogens. They also used microglia, which are essentially macrophages of the brain.

The team found that the mechanism involving TLR-2 was triggered by both CsgA and beta-amyloid but only when these proteins were allowed to aggregate into amyloids.

The UC Davis Alzheimer’s Disease Center conducts research and coordinates care for patients who have been diagnosed with Alzheimer’s disease and other forms of dementia.

The center, which operates in conjunction with nationwide and statewide programs, also has four other important goals:

The Alzheimer’s Disease Center is funded by the state of California through the Department of Public Health and by the National Institutes of Health, National Institute on Aging. For more information, visit www.ucdmc.ucdavis.edu/alzheimers.

“The CsgA peptide and beta-amyloid don’t have anything genetically in common. The similarity is only in the structure of the amyloids they form. Our study indicates that there is some structural feature of amyloids that triggers the innate immune system,” Bäumler said.

The current findings are only the first step in what may ultimately be a drug treatment for amyloid diseases. If researchers can find a drug that inhibits the TLR-2-dependent immune response, Bäumler said, they could potentially slow down the progression of amyloid diseases, including Alzheimer’s.

“You have to know what causes the diseases in order to find the right drug target. Now we know what’s causing the chronic inflammation associated with amyloids. It’s a start, though we’re still a long from finding a treatment,” he said.

The study was funded by Public Health Service grants to Bäumler and a Scientist Development Grant from the American Heart Association to Cagla Tükel.

UC Davis School of Medicine is among the nation's leading medical schools, recognized for its specialty-and primary-care programs.The school offers combined medical and master's degree programs in public health, business administration, and rural health, as well as a combined medical and doctoral degree for physician scientists interested in addressing specific scientific, social, ethical and political challenges of health care. Along with being a leader in health-care research, the school is known for its commitment to people from underserved communities and a passion for clinical care. For more information, visit UC Davis School of Medicine.