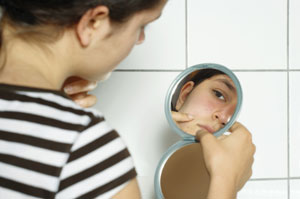 It is estimated that 85 percent of teens get acne, usually starting at age 11 for girls and a couple years later for boys.

It’s one of nature’s ironies that acne hits people at the time of life when they are most concerned about their appearance. Teens, who may spend hours primping in front of the mirror, often have to contend with more skin problems in these years than they ever will again.

The bad news is that acne can still be a part of growing up. The good news is that doctors have a few more tricks for treating it than they did when the parents of today’s teens went through adolescence.

Dr. Lamb is an assistant professor of dermatology with UC Davis Medical Group.

Acne (which includes pimples, whiteheads, blackheads, cysts and pustules) occurs at tiny pores associated with hair follicles on the face, chest and back. Tiny oil (sebaceous) glands around these follicles are stimulated by hormonal changes during puberty to produce an oily sebum.

In acne, the opening of the follicle gets blocked, preventing the sebum from escaping normally. The resulting blocked pore is commonly called a whitehead. Blackheads occur when whiteheads are exposed to the air. Sometimes bacteria multiply within the plugged pores, causing tender, red pimples. If they also become filled with pus and fluid, painful cysts result.

An issue for 85 percent of teens

Those who don’t develop acne as a teenager are in a lucky minority. It is estimated that 85 percent of teens get acne, usually starting at age 11 for girls and a couple years later for boys. Acne can last throughout the teen years and into the early 20s. Older adults may also continue to be bothered by it. Many women note that it worsens just before menstruation and disappears during pregnancy.

Many “don’ts” our parents handed down to us about treating acne still apply. Don’t pick at, squeeze or roughly scrub pimples. Fortunately, chocolate, the food that many in my generation were told to avoid, is an innocent bystander. No special diet has been found helpful in controlling acne.

No special diet has been found helpful in controlling acne.

Simple treatment of acne involves keeping the skin clean, which promotes the shedding of old skin.

Options for persistent or severe cases

Consult your primary care doctor or a dermatologist (a physician who specializes in skin care) if the acne is severe, with cyst development or scarring, or if an acne problem does not improve after two to three months of treatment with over-the-counter preparations. They may recommend medications that more strongly promote skin shedding, such as those based on vitamin A, including Retin A. One such medication, the orally taken Accutane pill,  is an effective medication, but can cause side effects, as well as serious birth defects if a woman uses it during pregnancy. For this reason, I monitor patients closely for side effects and do not prescribe this medication for women who are sexually active unless they are using reliable contraceptives.

With so many good treatments for acne available, there is no reason to merely suffer through this problem until it goes away.

Doctors may also prescribe antibiotics, either taken by mouth or applied directly to the skin. Steroid injections can also be helpful for patients who scar severely. Some acne lesions, such as cysts, may benefit by surgical drainage. For those with acne that leaves scars, chemical peels, dermabrasion, and laser techniques can even out the skin after the stage of active acne is over. One very new treatment available in dermatologist’s offices uses “blue light” to eradicate the bacteria that can aggravate acne.

The teenage years are a time so important to forming a positive social identity. A teen’s appearance becomes closely intertwined with his or her self-esteem. With so many good treatments for acne available, there is no reason to merely suffer through this problem until it goes away. I encourage parents to take acne seriously and treat it. Also, adults who continue to have moderate to severe acne problems should not hesitate to seek professional advice.