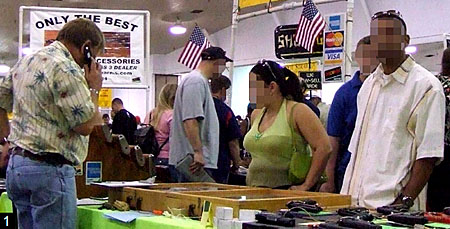 A straw purchaser, the woman (center), has already completed a Firearms Transaction Record. The salesperson is requesting a background check on her while the real purchaser (right), remains uninvolved.

Gun shows and the lack of uniform gun-control laws provide easy access to guns that can be used for criminal purposes, according to a new report from the UC Davis Violence Prevention Research Program.

Entitled "Inside Gun Shows: What Goes on When Everybody Thinks Nobody’s Watching," the comprehensive, 300-page report provides a “you are there” exposure to the issue based on direct observations made at 78 gun shows in 19 states, most of them between 2005 and 2008.

The report features hundreds of photographs and some video that show:

“Law enforcement needs to have an expanded, proactive program at gun shows to prevent the illegal sale of guns.”
— Garen Wintemute, study author

“Illegal transactions were often conducted entirely out in the open,” said Garen Wintemute, professor of emergency medicine at UC Davis School of Medicine and a leading researcher on firearm violence who authored the report. “The sense of impunity among sellers and purchasers in these cases was remarkable.”

While enforcement programs and regulatory policies are in effect in some states, Wintemute says more needs to be done to prevent both unregulated gun sales and illegal gun sales at gun shows and elsewhere. 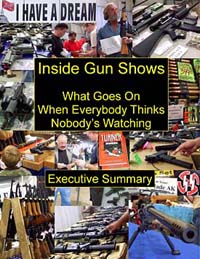 “Law enforcement needs to have an expanded, proactive program at gun shows to prevent the illegal sale of guns,” said Wintemute. “We also need to update existing laws so that all private-party gun sales, not just those at gun shows, are subject to the same safeguards now in place for gun purchases from licensed dealers.”

Current laws require licensed retailers to see a buyer’s identification and require buyers to complete a lengthy Firearms Transaction Record, which certifies that buyers are purchasing a gun for themselves and that they are not prohibited from owning a gun. Licensed retailers also must submit this information for a background check and keep a record of the purchase. Unlicensed vendors or individual attendees at gun shows, however, are not required to follow these same federal safeguards.

The Violence Prevention Research Program is a multidisciplinary effort researching the causes and prevention of serious violence with an emphasis on firearm violence. Copies of the report and more information are available at www.ucdmc.ucdavis.edu/vprp.

“Undocumented private party gun sale transactions account for as many as 40 percent of all gun sales,” said Wintemute. “They are quick and convenient, and their anonymity attracts those who put privacy at a premium. These same attributes make private-party gun sales a principal option for a felon or other prohibited person.”

Gun shows are a leading source of guns used in criminal violence in Northern California, the United States, Mexico and Canada.  Legislation to regulate gun shows has been introduced in Congress, and stepped-up enforcement operations are under way. Nonetheless, it has been suggested that efforts to prevent gun violence should focus elsewhere.

This research was funded with a grant from the Eli and Edythe L. Broad Foundation, the Joyce Foundation and the California Wellness Foundation.