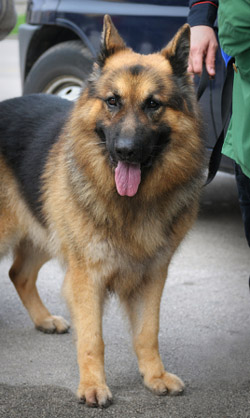 To evaluate the effects of handler beliefs and expectations on detection-dog performance, the researchers recruited 18 handler-detection dog teams from law-enforcement agencies.

The performance of drug- and explosives-sniffing dog/handler teams is affected by human handlers’ beliefs, possibly in response to subtle, unintentional handler cues, a study by researchers at UC Davis has found.

The study, published in the January issue of the journal Animal Cognition, found that detection-dog/handler teams erroneously “alerted,” or identified a scent, when there was no scent present more than 200 times — particularly when the handler believed that there was scent present.

“It isn’t just about how sensitive a dog’s nose is or how well-trained a dog is. There are cognitive factors affecting the interaction between a dog and a handler that can impact the dog’s performance,” said Lisa Lit, a postdoctoral fellow in the Department of Neurology and the study’s lead author.

"These might be as important — or even more important — than the sensitivity of a dog’s nose.”

“Dogs are exceptionally keen at interpreting subtle cues, so handlers need to be cognizant of that to optimize the overall team performance,” said Anita M. Oberbauer, chair of the Department of Animal Science and the study's senior author.

To evaluate the effects of handler beliefs and expectations on detection-dog performance, the researchers recruited 18 handler-detection dog teams from law-enforcement agencies. All of the teams were certified by an agency for either drug detection, explosives detection or both.

The dogs all were trained to either alert passively at the location of a scent by sitting or laying down, alert actively by barking, or by doing both. The teams included 14 male dogs and four female dogs, including Labrador retrievers, Belgian Malinois, German Shepherd dogs and Dutch Shepherd dogs. The dogs’ level of experience ranged from two to seven years. Their human partners had as many as 18 years of dog-handling experience.

The setting for the study was a church — selected because it was unlikely to have contained either explosives or drugs in the past — where neither the dogs nor the handlers had been before. The researchers created four separate rooms for the dogs to examine or “clear.”

“It isn’t just about how sensitive a dog’s nose is or how well-trained a dog is. There are cognitive factors affecting the interaction between a dog and a handler that can impact the dog’s performance.”
— Lisa Lit

Each room represented a different experimental condition or scenario:

The dog-handler teams conducted two separate five-minute searches of each room. When handlers believed their dogs had alerted — indicated a target scent — an observer recorded the location indicated by handlers. Search orders were counterbalanced; that is, all teams searched the rooms in a different order.

That is significant, Lit said, because there were more alerts on target locations indicated by human suggestion — the construction paper — than at locations of increased dog interest — the hidden sausage and tennis balls. There also were alerts on a wide variety of other locations, indicating that the dogs were not simply alerting in the same locations where other dogs had done so.

Lit noted that in the early 20th century in Germany a horse named Clever Hans was believed to be capable of counting and other tasks. It was determined that Clever Hans actually was responding to the minute, postural and facial cues of his trainer or other observers. Similarly, detection dogs may be alerted to subtle human cues that direct dog responses without formal training, including pointing, nodding, head-turning and gazing.

Lit, who was previously a detection-dog handler, said the study should be replicated with dog teams being videotaped to carefully assess hidden cues handlers might be giving.

“This study should be replicated and expanded so that we can assess hidden cues handlers might be giving. It might be the case that everyone is doing the same types of things so that you could possibly address it directly,” she said. 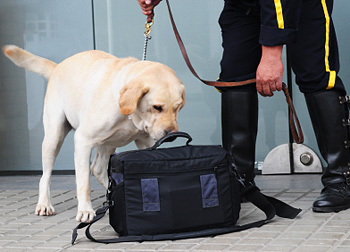 Lisa Lit, who was previously a detection-dog handler, said the study should be replicated with dog teams being videotaped to carefully assess hidden cues handlers might be giving.

“It is important to recognize that these findings do not mitigate the abilities of these handler/dog teams to perform successfully. Our data, together with our previous findings and those of other researchers, continue to emphasize that many cognitive factors can affect handlers, dogs and the handler-dog dyad. Further research is required to characterize these factors in order to optimize working dog and handler performance. Also importantly, the sensitivity of dogs to social cues as suggested by this study points to the potential to develop good models to study social behavior.”

Lit recently completed the Autism Research Training Program at the UC Davis MIND Institute. In addition to studies of how cognition can affect working-dog performance, she is currently engaged in research on neurodevelopmental and neurological disorders, investigating the dog as an animal model for social behaviors relevant to these disorders.

Other study authors include Julie Schweitzer, an associate professor of psychiatry and behavioral sciences, and Anita M. Oberbauer, chair of the Department of Animal Science, both of UC Davis.