Study: Migrants are more likely to suffer anxiety, depression than family members who remain in Mexico 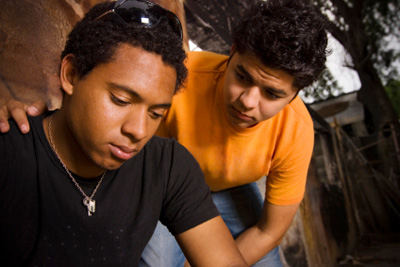 Among migrants, those between 18 and 25 have the greatest risk of experiencing a depressive disorder — nearly four-and-one-half times greater than their same-age Mexican peers who do not immigrate.

Mexicans who migrate to the United States are far more likely to experience significant depression and anxiety than individuals who do not immigrate, a new study published today in the Archives of General Psychiatry, a JAMA Archives journal, has found.

The study, "Migration from Mexico to the U.S. and subsequent risk for depressive and anxiety disorders: A cross-national study," was conducted collaboratively by researchers at the UC Davis School of Medicine and the National Institute of Psychiatry, Mexico. It is the first to suggest that migrating to the U.S. places one at risk of “clinically significant” mental-health problems.

Greatest risk between the ages of 18 and 25

Among migrants, those between 18 and 25 have the greatest risk of experiencing a depressive disorder — nearly four-and-one-half times greater than their same-age Mexican peers who do not immigrate.

“We had a unique opportunity to examine the effect of migration by comparing migrants with people in their country of origin who did not migrate,” said lead study author Joshua Breslau, an associate professor of internal medicine at the UC Davis School of Medicine and a researcher with the UC Davis Center for Reducing Health Disparities. "The results suggest that after migrating from Mexico to the U.S., migrants are more likely to develop significant mental-health problems than individuals who remained in Mexico.”

“From the Mexican side, this study is very important, because most of what we know about what is happening to the population when they are in the United States is based on studies carried out in the U.S. only,” said Guilherme Borges, senior researcher with the National Institute of Psychiatry, Mexico, and professor of psychiatry at the National Autonomous University of Mexico. “Now, for the first time, we have data that compares the situation in the U.S. and in Mexico.”

“Conversely, there is evidence that the younger the Mexican migrants are when they arrive in the U.S., the greater their propensity to develop these disorders.”
— Sergio Aguilar-Gaxiola

Living away from home

The study analyzed data from interviews with approximately 550 male and female Mexican-born migrants and approximately 2,500 non-migrant Mexicans. It controlled for differences between migrants and non-migrants for factors that might affect their risk for mood and anxiety disorders, including differences in socioeconomic status. Risk of depression or anxiety was assessed through the use of an epidemiological survey tool that was administered in respondents’ homes by trained non-clinician interviewers using laptop computers. Study participants in the United States could respond to survey questions either in English or in Spanish.

“Migrants experience a wide range of mental problems that are exacerbated by the enormous stresses of  political and economic disenfranchisement and victimization.”
— Marc Schenker

One of the study’s strengths was that it compared migrants with same-aged non-migrant family members still living in Mexico. It found that during the period following arrival in the United States, Mexican migrants were nearly twice as likely (odds ratio of 1.8) to experience a first-onset depressive or anxiety disorder as their non-migrant peers. However, the elevated risk among migrants occurred almost entirely in the two youngest migrant groups, those between 18 and 25 years old and those between 26 and 35 at the time of the study.

The greatest risk was experienced by the youngest migrants, who were 18-to-25 years old at the time of the study. Their odds of suffering from any depressive disorder relative to non-migrants was 4.4 — or nearly four-and-one-half times greater — compared with 1.2 in the entire sample. In this age group, the odds of experiencing an anxiety disorder among migrants relative to non-migrants was 3.4 — or more nearly three-and-one-half times greater — compared with odds of 1.8 for the entire sample. The study found that the difference between the risk of experiencing anxiety or depression for migrants versus non-migrants was not statistically significant for those over 36.

Earlier studies have found that among Mexican-Americans, as among U.S. Hispanics more broadly, greater acculturation — adoption of American patterns of behavior — is associated with worse mental-health status, including higher rates of both psychiatric and substance-use disorders. In addition, among Mexican-born immigrants in the U.S., those who have been in the U.S. for longer periods of time have worse mental health than those who have arrived more recently.

About the UC Davis Center for Reducing Health Disparities

The UC Davis Center for Reducing Health Disparities, in alliance with the UC Davis Clinical and Translational Science Center, provides leadership and support within and beyond UC Davis Health System to promote the health and well-being of ethnically diverse populations.

The center focuses on raising awareness of the unique cultural and linguistic attributes of minority populations, developing culturally and linguistically sensitive communications for health-care professionals, and working with policymakers, administrators, practitioners, consumers and families to reduce health-care disparities and improve quality of care.

Building on UC Davis' long history of outreach to the most vulnerable, underserved populations in the Sacramento region, the center raises awareness, conducts critical research and assists those communities whose needs have never been addressed or met by the traditional health-care system. The center's ultimate goal is to improve health outcomes for all. For more information, visit www.ucdmc.ucdavis.edu/crhd.

“This study confirms our earlier research that suggests that the longer immigrants remain in their country of origin, the lower the likelihood that they will develop anxiety and mood disorders,” said senior study author Sergio Aguilar-Gaxiola, professor of clinical internal medicine, director of the UC Davis Center for Reducing Health Disparities and an author of the earlier studies. “Conversely, there is evidence that the younger the Mexican migrants are when they arrive in the U.S., the greater their propensity to develop these disorders.”

Need for "a bi-national or multinational approach"

“We tend to be very disease-specific when we address migrant health, focusing on HIV or tuberculosis, for example. But this is an enormous global population whose broadly based health-care needs have largely been overlooked,” said Marc Schenker, UC Davis professor of public health sciences and director of the Migration and Health Research Center.

"And within the range of health conditions, mental-health in particular has not been addressed. Migrants experience a wide range of mental problems that are exacerbated by the enormous stresses of  political and economic disenfranchisement and victimization. Only a bi-national or multinational approach will be effective in improving this picture,” Schenker said.

“This study is important because it shows that the stresses that result from the Mexican-U.S. migration process have to be addressed by efforts from both countries. If you want to target this population successfully, you need to design programs that have an impact on both sides of the border.”

The study was funded by grants from the U.S. National Institute of Mental Health and the UC Davis Clinical and Translational Science Center. The study also was supported by the Migration and Health Research Center, a collaborative effort of the Berkeley and Davis campuses of the University of California that aims to advance research on the interplay between migration and all aspects of health.