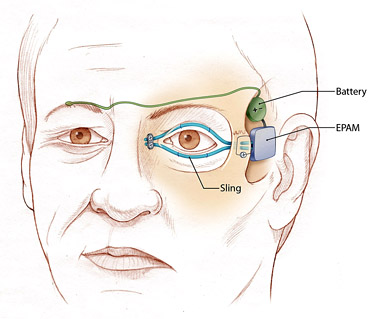 Surgeons from UC Davis Medical Center have demonstrated that artificial muscles can restore the ability of patients with facial paralysis to blink.

Surgeons from UC Davis Medical Center have demonstrated that artificial muscles can restore the ability of patients with facial paralysis to blink, a development that could benefit the thousands of people each year who no longer are able to close their eyelids due to combat-related injuries, stroke, nerve injury or facial surgery.

In addition, the technique, which uses a combination of electrode leads and silicon polymers, could be used to develop synthetic muscles to control other parts of the body. The new procedure is described in an article in the January-February issue of the Archives of Facial Plastic Surgery.

“This is the first-wave use of artificial muscle in any biological system,” said Travis Tollefson, a facial plastic surgeon in the UC Davis Department of Otolaryngology — Head and Neck Surgery. “But there are many ideas and concepts where this technology may play a role.”

In their study, Tollefson and his colleagues were seeking to develop the protocol and device design for human implantation of electroactive polymer artificial muscle (EPAM) to reproducibly create a long-lasting eyelid blink that will protect the eye and improve facial appearance. EPAM is an emerging technology that has the potential for use in rehabilitating facial movement in patients with paralysis. Electroactive polymers act like human muscles by expanding and contracting, based on variable voltage input levels.

For people with other types of paralysis, the use of artificial muscles could someday mean regaining the ability to smile or control the bladder. Reanimating faces is a natural first step in developing synthetic muscles to control other parts of the body, said UC Davis otolaryngologist Craig Senders.

“Facial muscles require relatively low forces, much less than required to move the fingers or flex an arm,” said Senders.

Blinking is an essential part of maintaining a healthy eye. The lid wipes the surface of the eye clean and spreads tears across the cornea. Without this lubrication, the eye is soon at risk of developing corneal ulcers that eventually can cause blindness.

Involuntary eye blinking is controlled by a cranial nerve. In most patients with permanent eyelid paralysis, this nerve has been injured due to an accident, stroke, or surgery to remove a facial tumor. Many have no other functioning nerves nearby that can be rerouted to close the eyelid. Others were born with Mobius syndrome, characterized by underdeveloped facial nerves. These patients are expressionless and can neither blink nor smile.

“This is the first-wave use of artificial muscle in any biological system.”
— Travis Tollefson

Eyelid paralysis currently is treated by one of two approaches. One is to transfer a muscle from the leg into face. However, this option requires six to10 hours of surgery, creates a second wound, and is not always suitable for elderly or medically fragile patients.

The other treatment involves suturing a small gold weight inside the eyelid. The weight closes the eye with the help of gravity. Though successful in more than 90 percent of patients, the resulting eye blink is slower than normal and cannot be synchronized with the opposite eye. Some patients also have difficulty keeping the weighted lid closed when lying down to sleep. In the United States, an estimated 3,000 to 5,000 patients undergo this surgery every year and therefore might benefit from an alternative treatment.

For their study, Senders and Tollefson used a novel alternative method for eyelid rehabilitation in permanent facial paralysis. They used an eyelid sling mechanism to create an eyelid blink when actuated by an artificial muscle. Using cadavers, the surgeons inserted a sling made of muscle fascia or implantable fabric around the eye. Small titanium screws secured the eyelid sling to the small bones of the eye. The sling was attached to a battery-operated artificial muscle. The artificial muscle device and battery were into a natural hollow or fossa at the temple to disguise its presence.

Senders and Tollefson found that the force and stroke required to close the eyelid with the sling were well within the attainable range of the artificial muscle. This capability may allow the creation of a realistic and functional eyelid blink that is symmetric and synchronous with the normal, functioning blink. A similar system also could give children born with facial paralysis a smile.

About the Department of Otolaryngology —Head and Neck Surgery

The Department of Otolaryngology —Head and Neck Surgery at UC Davis Health System provides comprehensive services to patients from throughout Northern California and Northern Nevada.

The three-layered artificial muscle was developed by engineers at SRI International of Palo Alto, Calif., in the 1990s. Inside is a piece of soft acrylic or silicon layered with carbon grease. When a current is applied, electrostatic attractions causes the outer layers to pull together and squash the soft center. This motion expands the artificial muscle. The muscle contracts when the charge is removed and flattens the shape of the sling, blinking the eye. When the charge is reactivated, the muscle relaxes and the soft center reverts back to its original shape.

For patients who have one functioning eyelid, a sensor wire threaded over the normal eyelid could detect the natural blink impulse and fire the artificial muscle at the same time. Among patients lacking control of either eyelid, an electronic pacemaker similar to those used to regulate heartbeats could blink the eye at a steady rate, and be deactivated by a magnetic switch.

The researchers are now refining the technique on cadavers and animal modes. They estimate the technology will be available for patients within the next five years.

The study was funded by a grant from the American Academy of Facial Plastic and Reconstructive Surgery.