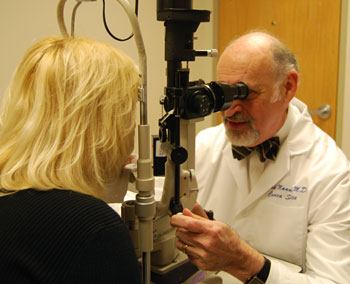 Most people at risk for developing glaucoma due to high eye pressure do not need treatment, according to a large, multi-center study, in which the UC Davis Health System Eye Center played a central role. The results of the 15-year Ocular Hypertension Treatment Study (OHTS) were presented at the annual meeting of the American Glaucoma Society in Florida and published in Archives of Ophthalmology.

“These results are just the beginning,” said James Brandt, professor of ophthalmology and vision science and the lead investigator of the OHTS at UC Davis. “Although the results show that many patients can simply be monitored without treatment, the OHTS also gives us the tools to identify who is at most risk and who should be treated. The OHTS participants are among the most carefully studied eye patients in history. Samples of their DNA are now being analyzed and further research is likely to result in new genetic tests and a better understanding of glaucoma.”

"Although the results show that many patients can simply be monitored without treatment, the OHTS also gives us the tools to identify who is at most risk and who should be treated."
—  James Brandt

The OHTS ran from 1994 until 2009. All of the participants, ages 40 to 80, had elevated eye pressure but no evidence of glaucoma. For the first seven years, half of the subjects received eye drops. The other half were closely monitored but received no medication. That first phase of the study determined that drops could reduce the development of the potentially blinding disease by more than 50 percent.

After the first phase of the study, OHTS researchers put everyone on eye drops, and now they have determined that in patients at lower risk, there wasn’t much difference between those who started using eye drops in 1994 and the original control group, who didn’t get drops until over seven years later.

About the UC Davis Eye Center

The center's team of world-class ophthalmologists and vision scientists is rapidly advancing toward cures for blinding eye disease. For information, visit the center's website.

“This study has determined that close monitoring is an appropriate option for large numbers of people with ocular hypertension but no damage from glaucoma,” said Paul A. Sieving, director of the National Eye Institute of the National Institutes of Health, which funded the OHTS study. “This is a strong example of research that can result in more appropriate treatment at a lower cost.”

Early in the study, Brandt suggested adding an element to the study — measuring corneal thickness. African-Americans as a group appear to have thinner corneas and a slightly different anatomical structure to the optic nerve than people from other ethnic backgrounds. Because of the elevated risk, close monitoring may not be appropriate for many African-American patients and treatment may be indicated. The study’s principal investigator, Michael A. Kass of Washington University in St. Louis, Mo., said individual risk assessments should determine which patients receive treatment and which patients are followed.

The UC Davis Health System Eye Center is Northern California’s most comprehensive center for the diagnosis and treatment of all types of glaucoma. Pictured is Michele Lim, associate professor, medical director and vice chair.

“In low-risk patients, close observation looks to be an effective approach,” Kass said. “But it’s important that all patients receive regular eye exams, to detect elevated pressure and to assess other risk factors for glaucoma. If you have high eye pressures with no glaucoma damage, speak to your eye doctor about your risk for developing glaucoma and whether you might benefit from preventative treatment.”