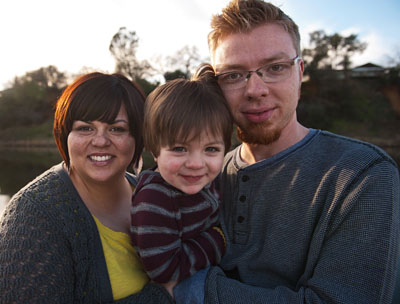 Owen Palmquist — the first "cool baby" treated at UC Davis Children's Hospital — with his mom and dad, Shantel and Andrew.

Owen Palmquist was a really cool baby — in fact he was the very first.

Called "Cool Babies," the therapy instituted in June 2009 at the hospital now has reached a milestone — more than 50 infants have been treated with marked success, according to Ian Griffin, a neonatologist and the program's founder and director.

Birth asphyxia, also known as hypoxic ischemic encephalopathy (HIE), occurs when the oxygen supply to the brain is diminished or cut off entirely. In infants, this often occurs because of an insult or other difficulty during labor and delivery.

Minimizing the effects of birth asphyxia

Griffin explained that the induced hypothermia therapy is designed to minimize the secondary effects of HIE by inhibiting injured brain cells from releasing harmful substances that can damage the healthy cells in the brain.

"There is a first phase of damage that results from the loss of oxygen to the brain," said Griffin, an associate professor of pediatrics. "But there is a second phase of damage that happens due to the release of amino acids and fatty acids by the injured cells that starts at between about six and 12 hours after the initial insult."

It includes the Central Valley's only pediatric emergency department and level I pediatric trauma center, which offers the highest level of care for critically ill children.

For more information, visit the Web at children.ucdavis.edu.

Cooling the infants' bodies minimizes the damage from this second phase of injury, Griffin said, though the precise reason why the therapy is effective still is not known.

"This therapy is the first thing that we've ever had that benefits these patients."
— Ian Griffin

A study published in the New England Journal of Medicine in 2005 and another published last year in the journal Pediatrics both found that the infant cooling therapy is safe and associated with a trend of reduced risk of death and disability.

Griffin noted that advanced neonatal care has allowed doctors to save the lives of infants born with brain injuries. But many of those infants would go on to experience mild-to-severe developmental delays. He said that it is hoped that induced hypothermia will result in fewer infants with devastating lifelong disabilities.

The procedure optimally is started in the first six to 14 hours of life. To be eligible for the therapy infants must be born at term — 36 weeks or later — and exhibit symptoms of distress, such as having an Apgar score below five, being in an altered state of consciousness, e.g., lethargic, and require mechanical ventilation.

Changing the course of neonatal care

Palmquist is such an infant, born at 41 weeks gestation with hypoxic ischemic encephalopathy following prolonged labor, according to his father, Andrew Palmquist.

Born in Paradise, Calif., on July 19, 2009, Owen initially had no reflexes and no pupil dilation and abnormal brain waves immediately following his birth, his father said. The infant was transferred to UC Davis Children's Hospital where he was treated in the Neonatal Intensive Care Unit for two weeks.

"I was hopeful that we were being treated at UC Davis, but in the first few days the signs weren't so good. He had no visible signs of movement, he didn't have any reflexes, and they couldn't get his eyes to dilate for the first three days." 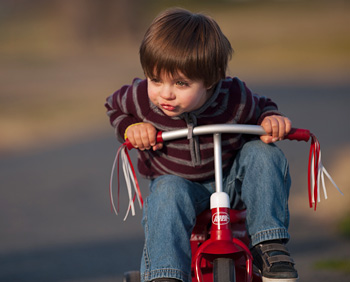 Today Owen's prognosis seems brighter, his father said. He has received speech and physical therapy and is developmentally about six months delayed when compared with other children his age. He attends preschool at California State University, Chico, where his mother is enrolled.

"In the past week or two he has started to speak in full sentences, where before it was just a word or two," Palmquist said. "We used to have to coach him quite a bit, but he is starting to use words on his own without prompting."

To be treated with cooling therapy, infants must have a gestational age of between 34 to 42 weeks — full term or older. Since its inception, UC Davis Children's Hospital has placed 54 babies on the cooling regimen, about 20 a year. The program has a 95 percent survival rate, Griffin said. A significant measure of the infants' recovery is that, at discharge, almost all of the babies have been sent home feeding normally, he said.