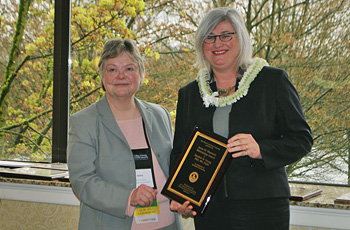 The award was established in 1992 in honor of Anna M. Shannon, a former dean and professor at the Montana State University College of Nursing, in recognition of Shannon's unselfish efforts to support and promote the professional growth of nurses throughout the west.

Young was nominated for the award by three nurse researchers, including one faculty member from the Betty Irene Moore School of Nursing at UC Davis, Elena O. Siegel.

"Dr. Young's career reflects extraordinary contributions to nursing, with steadfast commitment to the development of our next generation of nurse leaders in practice, education and research," Siegel said. "I have greatly benefited from her mentorship and am committed to carrying forward the benefits of her mentoring through my service as a mentor and role model for others."

"I have greatly benefited from her mentorship and am committed to carrying forward the benefits of her mentoring through my service as a mentor and role model for others."
— Elena Siegel

About the Betty Irene Moore School of Nursing at UC Davis

Established in March 2009, the Betty Irene Moore School of Nursing is UC Davis' first major initiative to address society's most pressing health-care problems in its second century of service. The school was launched through a $100 million commitment from the Gordon and Betty Moore Foundation, the nation's largest grant for nursing education. The vision of the Betty Irene Moore School of Nursing is to transform health care through nursing education and research. Through nursing leadership, the school discovers knowledge to advance health, improve quality of care and health outcomes, and inform health policy.

The school's first academic programs, a doctoral and a master's degree program, opened in fall 2010. Additional programs will be phased in over the next decade. The Betty Irene Moore School of Nursing is part of UC Davis Health System, an integrated, academic health system encompassing UC Davis School of Medicine, the 645-bed-acute-care hospital and clinical services of UC Davis Medical Center and the 800-member physician group known as the UC Davis Medical Group. For more information, visit nursing.ucdavis.edu.

"Dr. Young has served as a formal mentor to 56 emerging nurse leaders, including 13 junior faculty and postdoctoral scholars, and 19 doctoral and 24 master's-degree students," Siegel said. "In addition, she has served as a mentor for recipients of awards from the Robert Wood Johnson Foundation Nurse Faculty Scholar program, John A. Hartford Foundation Building Academic Geriatric Nursing Capacity program, and deTornyay Center for Healthy Aging."

Another nominator said Young's mentoring style is inclusive and focuses on collaboration and engagement.

"I commend the way Dr. Young fosters relationships with professionals across disciplines and institutions to bring a more well-rounded perspective to nursing," wrote Colleen Casey, an assistant professor at OHSU.

Young was presented with the award at the annual awards luncheon today. The Western Institute of Nursing includes more than 25 nursing schools from across 15 western states. Nearly 800 nurses convened for the 2012 conference, the largest gathering ever. The annual Communicating Nursing Research conference is the oldest conference of its kind in the United States. It was first conducted in 1968.

"To be recognized by my peers is an incredible honor," Young said. "I am forever grateful for those who mentored me. I believe mentorship is essential to the development of new nurse leaders. My hope is all nurses seek roles where they can be mentored and mentor other nurses."

More than 28 Betty Irene Moore School of Nursing faculty, postdoctoral scholars and students participated in the poster sessions and symposiums at the Western Institute of Nursing conference.