Amid bustling morning business, Emigh Ace Hardware in Carmichael hosted a Sept. 22 send-off for Parmina Valentine, a Sacramento girl who will travel to Washington, D.C., and Orlando, Fla., to represent California as this year's Children's Miracle Network Champion.

Parmina, an 11-year-old patient at UC Davis Cancer Center, could not attend the event because of illness, but her courageous fight against cancer and commitment to the Children's Miracle Network were recognized by Emigh co-owner Brian Lawrence, California Assemblyman Richard Pan, who is also a UC Davis associate professor pediatrics, and Anthony Philipps, chair of the UC Davis Department of Pediatrics.

"It's enough to have to fight a diagnosis of cancer, but to step up to be a champion and fight for all children who need help is extraordinary."
— Assemblyman Richard Pan

Ace Hardware has raised over $46 million for Children's Miracle Network in the past 21 years.

"It's family businesses like yours that not only get the economy going but that support important charitable and philanthropic efforts in the community," Pan said of Emigh. "And Children's Miracle Network plays such a vital role in ensuring that children can get the care they need." 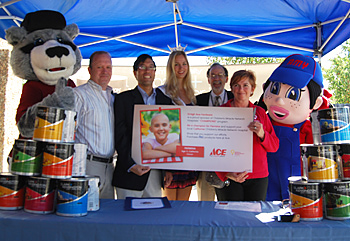 "It's enough to have to fight a diagnosis of cancer, but to step up to be a champion and fight for all children who need help is extraordinary," said Pan.

The champions program brings together children from across the United States who have tackled severe medical challenges. They represent the 17 million children treated every year at 170 Children's Miracle Network Hospitals, including UC Davis Children's Hospital. Throughout the year, champions and their families highlight the important work of children's hospitals.

Designated by the National Cancer Institute, UC Davis Cancer Center cares for 9,000 adults and children each year from throughout the Central Valley and inland Northern California. For more information, visit www.ucdmc.ucdavis.edu/cancer.