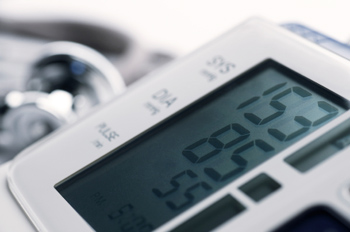 Uncontrolled high blood pressure damages the brain's structure and function as early as young middle-age, and even the brains of middle-aged people who clinically would not be considered to have hypertension have evidence of silent structural brain damage, a study led by researchers at UC Davis has found.

The investigation found accelerated brain aging among hypertensive and prehypertensive individuals in their 40s, including damage to the structural integrity of the brain's white matter and the volume of its gray matter, suggesting that vascular brain injury "develops insidiously over the lifetime with discernible effects."

Published online in October in the medical journal The Lancet Neurology, the study will appear in print in the December 2012 issue. It emphasizes the need for lifelong attention to vascular risk factors for brain aging, said study senior author Charles DeCarli, professor of neurology and director of the UC Davis Alzheimer's Disease Center.

"The message here is really clear: People can influence their late-life brain health by knowing and treating their blood pressure at a young age, when you wouldn't necessarily be thinking about it," DeCarli said. "The people in our study were cognitively normal, so a lack of symptoms doesn't mean anything."

Earlier studies have identified associations between elevated blood pressure and a heightened risk of brain injury and atrophy leading to reduced cognitive performance and a greater likelihood of dementia, making hypertension an important, modifiable risk factor for late-life cognitive decline. There is evidence, the study says, that lowering blood pressure among people in middle age and in the young elderly can help prevent late-life cognitive decline and dementia.

"The message here is really clear: People can influence their late-life brain health by knowing and treating their blood pressure at a young age, when you wouldn't necessarily be thinking about it."
— Charles DeCarli

Titled "Effects of Systolic Blood Pressure on White Matter Integrity in Young Adults: From the Framingham Heart Study,"  the research sought to decipher the age of onset, extent and nature of the effects of elevated systolic blood pressure on cognitive decline among participants in the Framingham study, a longitudinal evaluation begun more than 60 years ago of the cardiovascular health of the residents of Framingham, Mass., that is now in its third generation of participants.

The meticulously conducted study used magnetic resonance imaging (MRI) to determine the participants' brain health using a variety of measurements of white matter injury and gray matter volume. The MRI exams included diffusion tensor imaging, a particular kind of image that reveals microscopic details of tissue architecture within the white matter of the brain. The white matter includes the axons, the biological "wires" of the brain that carry information from one part of the brain to the other. Measurements from diffusion tensor imaging, such as fractional anisotropy, take on larger values if the axons are more intact. White-matter hyperintensities -- white-matter areas that appear intensely white on another kind of MRI scan -- suggest more severe damage than fractional anistropy does, and gray matter density also were examined. The imaging studies then were combined to create a global measurement of brain health that compared normal and hypertensive subjects.

The results were that, in hypertensive individuals, fractional anisotropy in the frontal lobes was reduced by an average of 6.5 percent. The hypertensives also had 9 percent less gray matter, on average, in their brains' frontal and temporal lobes. Hypertensive individuals' brains were significantly less healthy than those of subjects with normal blood pressure. For example, a typical 33-year-old hypertensive's brain health was similar to that of the typical 40-year-old normotensive subject. So, for those 33-year-olds, high blood pressure had prematurely aged the brain by seven or so years.

The authors did not postulate a mechanism for the damage. However, they noted that high blood pressure causes arteries to stiffen, thus making the blood flowing to the brain pulse more strongly. This stresses the blood vessels of the brain, likely making it more difficult for them to nourish brain tissue such as axons.

"This work suggests that recently described white matter microstructural damage associated with high blood pressure in the elderly may be detectable earlier in the life span, further reinforcing the view that vascular brain injury may develop insidiously over several decades," said Pauline Maillard, the study's lead author and a postdoctoral fellow in the UC Davis Department of Neurology. "These results emphasize the need for early and optimum control of blood pressure, which is neither routinely achieved nor subject to testing in randomized controlled clinical trials."

The UC Davis Alzheimer's Disease Center is one of only 27 research centers designated by the National Institutes of Health's National Institute on Aging. The center's goal is to translate research advances into improved diagnosis and treatment for patients while focusing on the long-term goal of finding a way to prevent or cure Alzheimer's disease. Also funded by the state of California, the center allows researchers to study the effects of the disease on a uniquely diverse population. For more information, visit alzhei