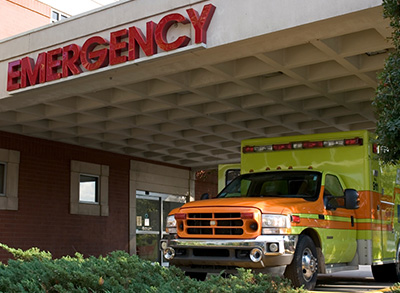 According to Kenneth W. Kizer, distinguished professor at UC Davis and director of the Institute for Population Health Improvement, underestimating the level of care that trauma patients require — known as under-triage — happens more often in the U.S. than it should.

Imagine that you’re a 70 year-old grandmother with diabetes, heart disease and other health problems who trips and falls while descending some stairs in your home, hitting your head on the wall. Although you might have sustained a brain injury, fracture or serious internal injury that warrants being seen at a designated trauma center, you instead are taken to the local community hospital that is not equipped to diagnose or treat all of your injuries.

According to Kenneth W. Kizer, distinguished professor at UC Davis and director of the Institute for Population Health Improvement, underestimating the level of care that trauma patients require — known as under-triage — happens more often in the U.S. than it should.

“There is compelling evidence that seriously injured persons are significantly more likely to survive if treated at trauma centers, compared to non-trauma centers,” Kizer said. “Yet more than a third of serious traumatic injuries occur in areas not having a designated trauma-care system, and many seriously injured persons are not treated at trauma centers even when their injuries occur within the catchment areas of designated trauma-care systems.”

A study of trauma care in California co-authored by Kizer in 2003, showed that only 56 percent of patients who were seriously injured within a designated trauma center’s catchment area received treatment in a trauma center. Other more recent studies have identified similar under-triage of major trauma patients to trauma centers, including about a third of elderly patients injured from falls or motor vehicle accidents.

“Under-triage of patients to trauma centers is especially a problem among older persons and among those with brain injuries,” Kizer said. “Unfortunately, our ability to understand why under-triage occurs often is hampered by fragmentation in the overall systems of trauma care, inadequate data management systems and lack of trauma-care performance reporting by non-trauma center hospitals.”

“We need to develop comprehensive standards to objectively measure and compare quality and long-term outcomes at the regional and national levels to address these inconsistencies.”
— Kenneth Kizer

“We need to develop comprehensive standards to objectively measure and compare quality and long-term outcomes at the regional and national levels to address these inconsistencies,” he said.

In addition to under-triage, Kizer also highlighted other areas of concern. These include trauma patients treated at designated trauma centers not receiving recommended care, medical errors being more common among critically ill trauma patients, and the proliferation of trauma centers. More than 200 new centers have been designated since 2009 alone, raising questions about the costs vs. the benefits of staffing and maintaining so many of these specialized facilities.

“Assessing the quality of trauma care has historically occurred at the local level using locally developed quality indicators,” he said.  “As a result, there is relatively little information to evaluate care at the regional or national level. And despite the exemplary efforts of the American College of Surgeons Committee on Trauma, there still is no comprehensive national trauma care data bank, nor a common language or taxonomy for trauma-care quality improvement.”

Kizer believes the trauma-care community needs to build upon its pioneering historical focus on evidence-based performance assessment and work with the National Quality Forum to establish a trauma-care quality improvement taxonomy and nationally endorsed performance measures that can be used for both internal quality improvement purposes and public reporting of quality. His other recommendations include: