The hidden dangers of tobacco use

How to limit second-hand exposure 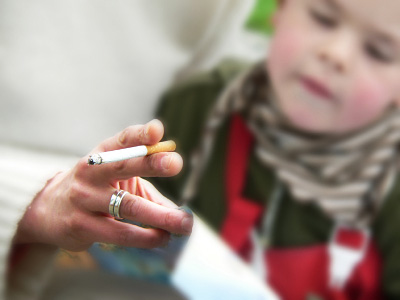 More than 3,000 people who die each year from lung cancer have never smoked, but have been exposed to someone else’s smoke.

In the fight against cancer and other diseases, new drugs, technologies and ongoing research are essential. But nothing would make a greater impact than the elimination of tobacco use and exposure.

Elisa Tong, UC Davis associate professor of medicine, says that tobacco leads the list of causes of preventable death, well ahead of obesity, alcohol consumption and handguns. Tobacco is implicated in 11 types of cancer, including stomach, esophagus, bladder, throat, and, of course, lung, as well as in heart disease and many other chronic illnesses. Indeed, if tobacco use and exposure were eliminated, the cancer death rate alone would drop by 30 percent, and almost 90% of lung cancer deaths would be prevented altogether.

Now, consider the fine print: more than 3,000 people who die each year from lung cancer have never smoked, but have been exposed to someone else’s smoke. The U.S. Surgeon General, in 2006, concluded that there was no risk-free exposure to second-hand smoke.

So how can you reduce your risk of cancer and other diseases brought on by tobacco exposure? Tong says that if you smoke, you can still quit and vastly reduce your risk for lung cancer. About 10 years after quitting, an ex-smoker’s risk of dying from lung cancer is 30 to 50 percent less than for those who continue to smoke. Five years after quitting, the risk of mouth, throat, esophagus, and bladder cancer is cut in half, And after just one year, the risk of coronary heart disease is cut in half.

The California Smokers’ Helpline, at 1-800-NO BUTTS (English) or 1-800-NO-FUME (Spanish), can provide great support to anyone wanting to quit.

California has taken a leading role in developing policies to protect non-smokers from exposure. Starting Jan. 1 of this year, for example, the University of California put in place a policy for all of its campuses, labs and centers prohibiting the use of cigarettes, e-cigarettes, cigars, snuff, snus, water pipes, pipes, hookahs, chew, and any other non-combustible tobacco product.

Individuals can play a role in reducing their risk even further.

A growing movement is under way to encourage owners of multi-unit complexes, where 65 percent of the air is shared among all residents, to enact smoke-free policies. When leasing an apartment or purchasing a condominium, find out whether smoking is allowed before you sign the dotted line.

Outdoor smoke also is being increasingly recognized as an important source of exposure. Advocates also want to curb smoking on public beaches, parks and other outdoor places throughout California. And laws now prohibit drivers from smoking with a child in the car.

Still, California’s workplaces are not considered 100% smoke-free by the federal Centers for Disease Control and Prevention.

One in seven workers is still being exposed to tobacco smoke on the job because of loopholes in laws , so knowing where those exist can help protect you and your loved ones.

In private residences licensed as family day care homes, for example, smoking is permitted after business hours and in areas where children are not present. It is still allowed in owner and volunteer-operated businesses with no employees, as well as in patient smoking areas of long-term health facilities.  Smoking is still allowed in 65 percent of hotel and motel guestrooms, meeting and banquet rooms except during food or beverage service.

Smoke-free environments benefit everyone. When it comes to our health, every effort to reduce you tobacco exposure will reduce your risk for cancer.