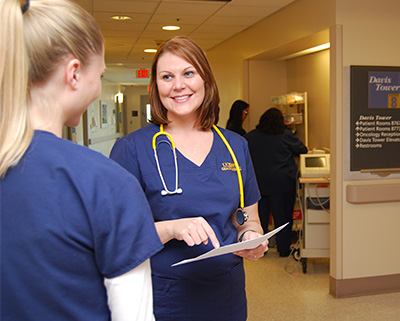 Oncology nurse specialist Michelle Clark is used to caring for patients with chronic pain. But when the avid skier, backpacker and exercise enthusiast herself began experiencing nerve pain from a bulging cervical disk in June 2011, she would learn firsthand about the disabling effects of chronic pain and the restorative power of acupuncture.

For Clark, the pain began suddenly one morning with severe neck and nerve pain in her right arm. Her primary care physician recommended an MRI, which confirmed a central disk bulge at C6/7. As Clark’s pain continued over the next four weeks, she was referred to the Physical Medicine and Rehabilitation Clinic for physical therapy and the UC Davis Pain Medicine Clinic.

During the next five months, she would receive multiple interventions to block pain signaling pathways and inflammation, including cervical epidural steroid injections, cervical trigger point injections, radiofrequency ablation and prescription medications. She would also work with a physical therapist to strengthen muscles.

“I felt trapped by the cycle of pain and wasn’t living,” Clark said. “I was in constant pain and had become less active, both physically and socially. I couldn’t drive and had to go on disability. As a result of all of the medications to control the pain and reduce muscle tension, I also developed insomnia, tension headaches, depression, weight gain, constipation and other side effects.”

“After my first acupuncture session, I immediately felt more relaxed. I fell asleep right in the car on the way home as my husband was driving, and then slept again for two hours more when I arrived home. That’s something I hadn’t been able to do for a long time.”
— Michelle Clark

Clark would ultimately need disk replacement surgery to repair her damaged vertebrae, but in the meantime, her pain specialist suggested that she try acupuncture as an adjunct to traditional treatment.

“At first I was very skeptical about acupuncture,” Clark said. “I didn’t understand how needles could help, but I had nothing to lose so I decided to try it.”

Ian Koebner, director of Integrative Pain Management in the UC Davis Division of Pain Medicine and a licensed acupuncturist with master’s degrees in both pain research, education and policy and in acupuncture and Oriental medicine, worked with Clark for six weeks before and after her surgery. Using a combination of traditional Chinese medicine and biomedical diagnostic techniques, he developed and implemented a treatment plan to achieve her primary goals: reduce the intensity of her pain, mitigate medication side effects, reduce her pain medications, and improve her sleep and mood. 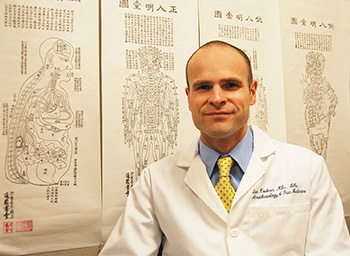 Ian Koebner is the director of Integrative Pain Management and a licensed acupuncturist at UC Davis.

“One of the central concepts in traditional Chinese medicine is that health results from a dynamic balance,” Koebner said. “The practitioner of TCM attempts to influence the complex interplay of internal and environmental causes of illness towards this balance through a variety of techniques,  including the placement of sterile and hair-thin needles at specific points on the body.”

In Clark’s case, Koebner stimulated points along affected muscle, nerve and meridian pathways. He also incorporated acupuncture points to specifically address Clark’s complaints about symptoms such as stress or insomnia, which were likely associated with her chief complaint of pain.

As a result of the weekly and sometimes twice-weekly acupuncture sessions, Clark reported not only a significant reduction in her pain, but also improvements in her mood, sleep and constipation. In addition, the pain relief she gained from acupuncture allowed her to initiate a medication-tapering plan with her physician.

“After my first acupuncture session, I immediately felt more relaxed,” Clark said. “I fell asleep right in the car on the way home as my husband was driving, and then slept again for two hours more when I arrived home. That’s something I hadn’t been able to do for a long time.”

Today, Clark is back at work and has tapered off of all of her pain medications. She also has been cleared to resume all physical activities, including working out at the gym.

“Michelle needed leading-edge neurosurgery to correct structural problems, but acupuncture effectively reduced her debilitating symptoms before surgery and facilitated her recovery after the operation. I feel fortunate to work within a system that can provide such comprehensive, multidisciplinary care,” Koebner said. 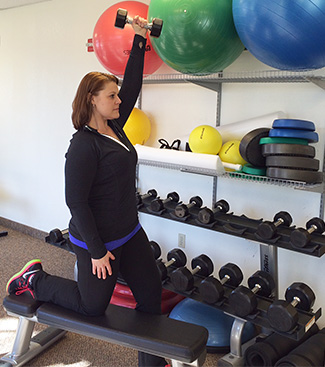 Michelle Clark has been cleared to resume all physical activities, including working out at the gym.

“Through the overall process, I learned to celebrate the gradual and steady improvements in my condition and to balance my life,” Clark said.  “I am so thankful for the life I have now.”

Acupuncture analgesia can be understood from both traditional Chinese medicine and biomedical perspectives. Traditional Chinese medicine theories and practices are founded on centuries of detailed, naturalistic observations of the interconnections among health, illness and the environment to identify and restore areas of disharmony in the body. The acupuncture technique that is most commonly used involves the placement of thin metal needles into the skin, which are then manipulated manually or by electrical stimulation.

From a biomedical perspective, acupuncture influences a number of biomarkers involved in the immune system, cardiovascular activity, gastrointestinal function, fMRI-detected brain activity and analgesia, including endogenous opioids, which relieve pain and reduce inflammation.

Acupuncture is among the most widely practiced forms of complementary medicine in the U.S., especially for the relief of chronic pain. It is also used to effectively treat a number of other conditions, including postoperative- and chemotherapy-induced nausea and vomiting and postoperative dental pain. It may also be beneficial in stroke rehabilitation, addiction, headache, menstrual cramps, fibromyaligia, tennis elbow, myofascial pain, osteoarthritis, carpal tunnel syndrome, asthma and low back pain.