Leaving a distance runners’ myth in the dust 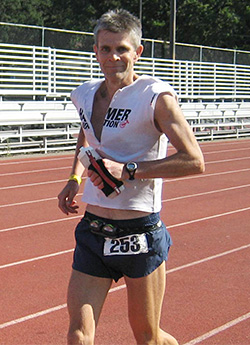 Marathon runners often hear the same cynical refrain from friends, relatives and co-workers: “You must be harming yourself somehow, spending more time than usual nursing injuries and missing time from school or work.”

And ultramarathon runners, who compete in races beyond the standard 26-mile distance—often 50 or 100 miles—hear the same worries in ultra doses.

As is the case with so many stereotypes, the facts paint quite a different picture.

Ultramarathon runners are in fact healthier than the general public, missing, on average, 40 percent fewer days of work or school than are missed by others: 2.2 days per year vs. 3.7 days.

Those are among the myth-busting findings of a study from UC Davis and Stanford researchers recently published in the science and medicine journal PLOS.

The Ultrarunners Longitudinal TRAcking (ULTRA) Study involving 1,212 active ultramarathoners, found that, so far, these runners have fewer chronic medical conditions than the general population, with just a couple exceptions. The researchers plan to follow this cohort of runners for another 20 years.

“Even though most of their medical visits are for exercise-related injuries, ultramarathoners still use fewer medical resources than the general public,” says senior author Martin Hoffman, who serves as chief of physical medicine and rehabilitation at the Veterans Administration Northern California Health Care System and is a volunteer clinical professor in the UC Davis Department of Physical Medicine and Rehabilitation.

“Even though most of their medical visits are for exercise-related injuries, ultramarathoners still use fewer medical resources than the general public.”
— Martin Hoffman

Hoffman, who also is a competitive distance runner and former cross-country skier, and co-author Eswar Krishnan, an assistant professor of medicine at Stanford University, found that ultramarathoners are prone to certain specific medical conditions and injuries, but none at a heightened level of concern.

“All of us who run ultramarathon distances or do other ultra-endurance sports hear from friends and family members that we’re harming ourselves,” says Hoffman, who has served since 2006 as director of research for the Western States Endurance Run, the world’s oldest 100-mile trail race. “There’s a general sense that all this exercise is bad for you, but I have had trouble believing that.”

He adds, “That has been part of the driving force to do the study, to see what the truth really is.”

For instance, asthma is more common among endurance athletes than in the general population, most likely the result of drying of the airways during exercise. And the prevalence of allergies in recreational marathon runners has been shown to be higher, possibly due to greater exposure to airborne allergens. Those considerations keep these findings from being surprising.

Ultramarathon runners have roughly the same annual incidence of exercise-related injuries as shorter distance runners but a higher proportion of stress fractures involving the foot — possibly due to running on uneven terrain — and it is the younger, less experienced ultramarathoners who appear most at risk for injury. Of all exercise-related injuries and illnesses, the incidence is highest for knee issues, accounting for 15 percent of all injuries. Sixty-four percent of outpatient medical visits among the study group were for exercise-related issues.

“Younger, less experienced runners in general need to be more cautious,” explains Hoffman. “But, beyond that, the prevalence of virtually all chronic diseases, use of the medical care system, and lost days of work or school has proven to be lower in ultramarathon runners than the general population.”

In short, he says, with a twinkle in his eye, “While the definitive answers will come after following these folks for 10-20 years, we have some pretty clear indications now that it can’t be all that bad.”

The ULTRA study is the result of work supported with resources and the use of facilities at the VA Northern California Health Care System. The work was also partially supported by the Western States Endurance Run Foundation. There was no additional external funding received for this study. The funders had no role in study design, data collection and analysis, decision to publish, or preparation of the manuscript.