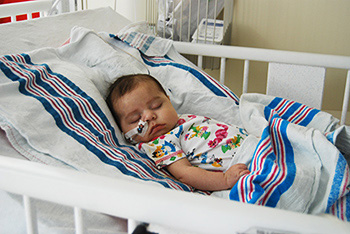 When Ruby Munoz was 6 weeks old, she was lethargic, vomiting and not eating well. Her sister, Scarlett, had just gotten over the flu. Her parents, Aaron and Hayleigh Munoz of Elk Grove, thought it must be another case of the flu.

Ruby had otherwise been a normal and healthy baby. There was nothing out of the ordinary about her health, apart from a heart murmur that doctors detected soon after she was born – but it had vanished by her two-week check-up.

Hayleigh and Aaron brought Ruby to the emergency room at their local hospital and she was transported to UC Davis Children’s Hospital to be monitored for dehydration. Doctors soon discovered there was something seriously wrong with her heart.

“There are very few centers that would have been able to respond as rapidly as we did. We felt strongly that if we didn’t do something to relieve the pressure on her left ventricle, she wouldn’t get better.”
— Gary Raff

Her left ventricle was being overworked as it tried to to move blood through her aortic valve, which was too small.  It had impacted her heart, lungs, kidneys and liver. The heart murmur that doctors heard at birth – the result of a turbulent blood flow across the heart valve – couldn’t be heard at her two-week appointment because her condition had weakened her heart and decreased its blood flow.

“There are very few centers that would have been able to respond as rapidly as we did,” said Gary Raff, pediatric cardiothoracic surgeon at UC Davis Children’s Hospital. “We felt strongly that if we didn’t do something to relieve the pressure on her left ventricle, she wouldn’t get better.”

As doctors were rushing to put her on an extra-corporeal life support device called ECMO, she suffered cardiac arrest.

“It was overwhelming initially and terrifying those first few days. Those were some dark days for us. We didn’t know if she was going to make it to the next day,” said Hayleigh Munoz.

Ruby was able to come off of the ECMO device soon after the surgery, which was the best possible outcome. As she recovered from surgery, her doctors worked to repair her organs and ensure that they were functioning properly again.

“The doctors really took the time to answer our questions and explain everything in layman’s terms. The nursing staff was there for Ruby as well as our whole family. They made sure Hayleigh and I got fresh air outside every day and brought toys and books to Scarlett when she would visit,” said Aaron Munoz. “I couldn’t have asked for a better place.”

With Scarlett at home and Hayleigh and Aaron Munoz taking turns at the hospital, Aaron Munoz spent weeks dreaming of the day that Ruby was healthy again and that his family could all be back at home under the same roof. More than eight weeks later, they brought home Ruby – just days before Christmas.

“It was a really happy homecoming,” said Aaron Munoz. “We wished and dreamed for the day for so long. I can’t tell you how great it was to have Ruby feeling well again, back at home.”