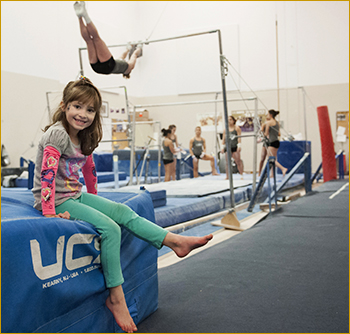 These days, the back handsprings, gainers and headstands performed by the Aggie women’s gymnastics team are fueled by more than a chance to compete at the National Collegiate Athletic Association championship.

Their drive for greatness also is inspired by their commitment to improve the quality of life for one of their youngest fans, UC Davis Comprehensive Cancer Center brain tumor patient, Alyssa Kalb.

The Foresthill 6-year-old has been “adopted” by the team through the Friends of Jaclyn Foundation, a remarkable organization that links children diagnosed with brain tumors with high school and college sports teams. The connections not only bring awareness to the problem of pediatric brain tumors but also provide hope, support and friendship to the patients and their families.

“It’s like she has 17 big sisters,” said Terry Kalb, Alyssa’s mom. “They are opening their hearts. They are very genuine.”

Alyssa has already had an impact on the team, as well.

“She is probably one of the strongest girls I have ever met going through cancer at such a young age, said gymnast Jamie Yamashita, 19. “I want to show her that everything is going to be OK, and let her know that she has other people here to help her.”

Alyssa was diagnosed with a juvenile pilocitic astrocytoma tumor near her brain stem in June 2011. She completed her chemotherapy regimen at the Cancer Center in October 2013. Grateful for her daughter’s care, Terry Kalb already has begun giving back with a fundraiser for pediatric brain tumor research and some goodies for the UC Davis pediatric infusion center. She also plans to start a support group for families of children with brain tumors. 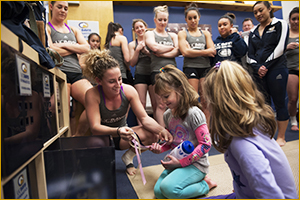 Women's gymnastics team presents Alyssa with the key to her own Aggie locker.

Their meet Friday at the Pavilion will be dedicated to awareness about the Friends of Jaclyn Foundation, Alyssa and her family, as well as Greg Campbell, who helped arrange the foundation connection with friend and former Aggie football player Austin Hayworth. Campbell, who also suffered a brain tumor in 2013, is now chief of staff for California Assembly Speaker John Perez.

Already, Alyssa’s presence has been felt. Said Coach John Lavallee: “We are having the best year ever in UC Davis gymnastics history.”