Researcher’s lifelong curiosity leads to new discoveries about the heart 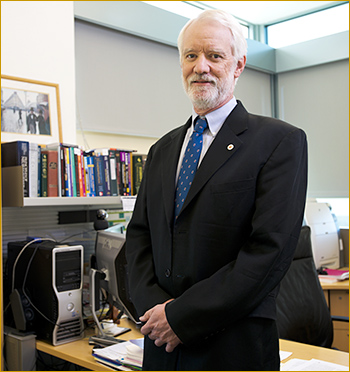 As an inquisitive teen, Don Bers dismantled and reassembled the engine of his first car to learn how it worked. When he found high-school chemistry lectures a bit mundane, he ran his own experiments — with the teacher’s blessing, of course — in the school’s lab.

“Yes, I did disrupt class once,” said Bers, a UC Davis cardiovascular researcher. “There was a small explosion and lots of smoke.”

By college, Bers was learning how the body works, and seeking answers to questions such as why the heart beats when it does. When a professor lectured on cardiac physiology, he was fascinated — and hooked.

Today, Bers is a world-renowned expert on the cellular and molecular factors that regulate heart excitation and contraction. His body of research has essentially built the modern framework for understanding normal and abnormal heart function, and he is the author of a reference book widely considered the bible of cardiac function.

Bers uses this profound knowledge and curiosity to confront important challenges in the prevention and treatment of heart conditions. His research team recently identified, for the first time, a biological pathway that is activated when blood sugar levels are abnormally high and causes irregular heartbeats, or cardiac arrhythmia.

"The novel molecular understanding we have uncovered paves the way for new therapeutic strategies that protect the heart health of patients with diabetes."
— Don Bers

The discovery helps explain why diabetes is a significant independent risk factor for heart disease, and was one of the most significant findings at UC Davis Health System in 2013.

“The novel molecular understanding we have uncovered paves the way for new therapeutic strategies that protect the heart health of patients with diabetes,” said Bers, who also chairs the UC Davis Department of Pharmacology.

While heart disease is common in the general population, the risk is up to four times greater for diabetics, according to the National Institutes of Health. The American Heart Association estimates that at least 65 percent of diabetics die from heart disease or stroke, and has emphasized the need for research focused on understanding this relationship.

More than 8 percent of Americans are estimated to be diabetic, and approximately 80 million more thought to be prediabetic.

Through a series of experiments, Bers and his collaborators showed that the moderate-to-high blood glucose levels characteristic of diabetes caused a sugar molecule (O-linked N-acetylglucosamine, or O-GlcNAc) in heart muscle cells to fuse to a specific site on a protein known as calcium/calmodulindependent protein kinase II, or CaMKII. 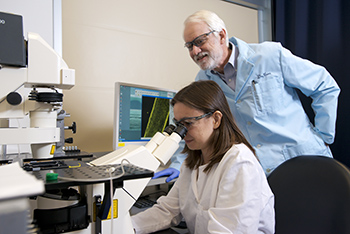 Bers and his research team focus on confronting important challenges in the prevention and treatment of heart conditions.

CaMKII has important roles in regulating normal calcium levels, electrical activity and pumping action of the heart. Its fusion with O-GlcNAc, however, led to chronic overactivation of CaMKII and pathological changes in the finely tuned calcium signaling system that it controls — triggering full-blown arrhythmias in just a few minutes. The arrhythmias were prevented by inhibiting CaMKII or its union with O-GlcNAc.

Gerald Hart, Bers’ collaborator and chair of the Department of Biological Chemistry at Johns Hopkins, said this research “represents the most clear-cut mechanistic study to date of how high glucose can directly affect the function of a critical regulatory protein.”

“The Bers group’s findings undoubtedly will lead to development of treatments for diabetic cardiovascular disease and, potentially, therapeutics for glucose toxicity in other tissues that are affected by diabetes, such as the retina, the nervous system and the kidney,” Hart said.