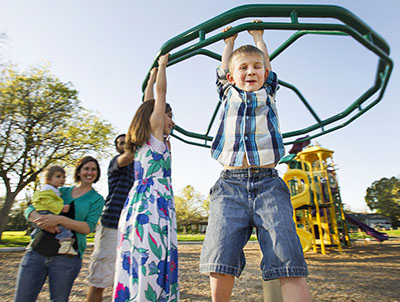 Kindergarten teacher Amber Lazaga tries hard to forget March 17 of last year. On that day, she was in church with her husband and their two children and pregnant with her third child when she heard a loud slam in another room. Her 4-year-old son, Jaden, had climbed a bookshelf to reach a ball. The shelf had fallen, and Jaden was underneath it.

She recalls the shelf being lifted and seeing her boy bleeding from his ears and nose and without a pulse. Jaden’s father, Gregory, who is also a teacher, performed CPR until an ambulance arrived and rushed them to UC Davis Medical Center, where MRIs showed a fractured skull with bleeding in and around the brain.

Jaden was admitted to the pediatric intensive care unit (PICU), where he remained almost motionless for two weeks. For the next three weeks, his eyes could open, “but he still wasn’t awake,” says Amber.

“There was literally nothing there,” she adds. “He was in his bed, and that was it. But no one — not our families, doctors or nurses — was ‘doom and gloom’ about it. We all had hope, and that mattered just as much as the medicine.”

An interventional neuroradiologist, Dahlin uses advanced imaging and endovascular technologies to repair blood vessels in the neck and head that are damaged by stroke, aneurysms, tumors or trauma. One of Jaden’s MRIs revealed a torn carotid artery near the base of his skull that was allowing blood to seep into his venous sinuses, causing his eyes to bulge.

“It’s called a carotid cavernous fistula and a pseudo-aneurysm, which we saw a lot before cars had air bags and accidents could cause impact injuries to both the front and the back of the head,” said Dahlin.

Dahlin explained that the injuries are typically repaired with stents to reconnect the arterial walls combined with blood-clotting coils prevent further bleeding. Stents, however, don’t grow along with a still maturing body. For young Jaden, he used an all-coil approach that can stop brain bleeds after an aneurysm rupture. 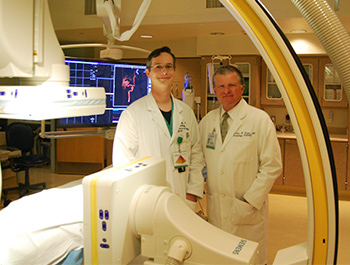 Procedures led by interventional neuroradiologist Brian Dahlin (left), together with his colleague, Arthur Dublin, repaired an arterial injury and allowed Jaden's skull and brain to heal.

During two procedures, Dahlin and colleague Arthur Dublin inserted a catheter through Jaden’s femoral artery in his groin and to the hole in the torn carotid artery, and then threaded ultrathin platinum coils through the catheter. The coils occluded the blood flow at the site of the injury, caused the blood to clot and sealed the bleeding artery.

“After that, Jaden’s skull and brain had a chance to heal,” Dahlin says.

Following his vascular procedures, Jaden started to come back. He kicked a leg. He twitched a wrist. He rolled over. He sat up.

“Every day since then, it’s been all about his progress,” Amber says.

Jaden was transferred to the UC Davis Department of Physical Medicine and Rehabilitation, where speech, occupational and physical therapies helped further his “miraculous” return, according to Amber. During rehab, Jaden’s family got to re-experience his first word, his first steps and his first laugh all over again.

“He came home on Mother’s Day with a wheelchair and a feeding tube, and he never needed either one,” Amber says.

March 17 of this year will commemorate how grateful the Lazagas are for everyone who supported Jaden during his year of recovery — from the team at UC Davis to the friends and family who hoped or prayed for his life after the accident and every milestone he’s achieved since.

Jaden still has some facial paralysis from nerve damage and will soon have surgery to fix a deviated eye, “but he can do things he did before — and more,” says Amber. He’ll begin kindergarten in the fall already reading and knowing some math. And he enjoys playing in the park with his older sister, Anna, and younger sister, Hope, who was born while he was in the hospital.

"He is more sweet and sensitive than the willful little boy who climbed the bookshelf, and that is both good and bad,” says Amber. “His feelings are more easily hurt, but he also gives more hugs and says ‘I love you’ a lot more. He is truly awesome. We can’t wait to see what happens next with him. And we are so very thankful that he is with us.”