Vitamin B-12 supplements in newborns

Can it reduce feeding difficulties and other vitamin deficiency-related problems? 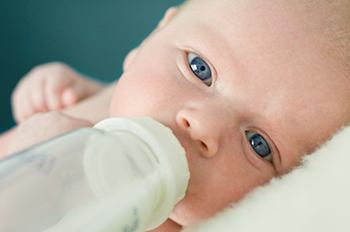 Vitamin B-12 deficiency in infants has been linked to failure to thrive, feeding difficulties and movement problems..

Vitamin B-12 (cobalamin) is an essential micronutrient that keeps the body’s nerve and blood cells healthy, helps make DNA, the genetic material in all cells, and prevents anemia. Without it, adults can suffer weight loss, fatigue, weakness, constipation, loss of appetite and neurological symptoms, including numbness and tingling in the hands and feet. But less is known about vitamin B-12 deficiency in early life.

A study conducted at Haukeland University Hospital in Bergen, Norway, and published in the November 2013 issue of American Journal of Clinical Nutrition has shown that vitamin B-12 supplements can help some infants with feeding difficulties, minor neurologic problems or developmental delay caused by suboptimal vitamin B-12 status.( For the study, the authors used a raised level of homocysteine as an indicator of underlying B-12 deficiency.)

“We know vitamin B-12 is critical for neural development and function throughout the lifespan,” said Ralph Green, professor of pathology and laboratory medicine at UC Davis, who published an accompanying editorial about the research. “In infants, deficiency of vitamin B-12 is associated with failure to thrive, problems with movement, delays in reaching typical developmental milestones and anemia.

“The Norwegian study is the first to demonstrate a clear beneficial effect of administering a vitamin B-12 supplement to infants who show even mild evidence of deficiency. But additional studies are needed to determine appropriate dosage and timing of B-12 supplementation and to better understand how to identify infants who will benefit most from treatment.”
— Ralph Green

“The Norwegian study is the first to demonstrate a clear beneficial effect of administering a vitamin B-12 supplement to infants who show even mild evidence of deficiency. But additional studies are needed to determine appropriate dosage and timing of B-12 supplementation and to better understand how to identify infants who will benefit most from treatment,” he said.

Green notes that most of the infants with B-12 deficiency in the study were exclusively breast-fed, which other studies have shown result in lower vitamin B-12 levels in infants compared to those fed formula.

He also points out that cows’ milk is a rich source of bioavailable B-12, raising the question of whether in some instances, despite the many advantages of breast feeding, B-12 supplementation should be considered to alleviate problems that may be attributed to B-12 deficiency. He believes additional studies are needed to assess the need for B-12 supplementation in infants in countries like the U.S. where cereal grains are fortified with folic acid.

Vitamin B-12 is found naturally in many animal products, including fish, shellfish, meat, poultry, eggs and dairy products. It also is added to some foods in the U.S., such as cereal grains labeled as fortified.

“Vitamin B-12 and folate (B9) have a complex interaction in the body,” Green said. “A deficiency of one may be ‘masked’ or at times aggravated by excess of the other.”

High levels of folate, for example, may mask underlying B-12 deficiency. On the other hand, work from his laboratory and a group in Boston have shown that in the U.S., among individuals with low B-12 levels, those with high folate levels may actually show more profound metabolic derangements than those with normal folate.