The next step in MRI 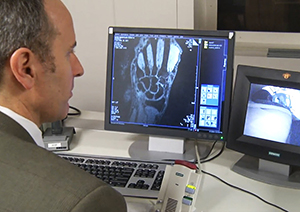 Radiologist Robert Boutin was part of the UC Davis team that developed a technique for capturing MRIs of the moving wrist.

The wrist is one of the body’s most intricate structures, and impairments in any part of its system of bones and joints — which makes all hand movement possible — can drastically affect daily life. For Cathy Wilson, it affects her livelihood as well.

Wilson is an Educational Sign Language interpreter, an instructor of American Sign Language and the parent of a deaf daughter. A wrist injury from an auto accident left her with painful electric shock sensations and an audible clicking noise each time she twisted her wrist.

“The clicking is a complete distraction for my students and causes me irritation and fatigue after a full day of communicating with my hands,” she said. "It also limits my abilities to communicate with my daughter."

The search for answers led the Red Bluff, Calif., resident to UC Davis orthopaedic surgeon Robert Szabo, an expert at repairing hand and wrist injuries. During a clinical exam, he ruled out all but two wrist parts, “but treatment plans can be very different depending on the specific site of the problem,” Szabo said.

“Active MRI provides a detailed and ‘real-time’ view of the kinesiology of the wrist in action using a widely available and safe technology.”
— Abhijit Chaudhari

He recommended a study of Wilson’s wrist using “Active MRI,” a new type of imaging developed at UC Davis that creates live-action video of the wrist in motion. The results showed two subluxations: one snapping tendon and a near joint dislocation. 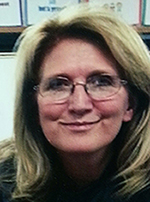 Cathy Wilson's search for answers to her wrist problems brought her to UC Davis, where she was one of the first to be diagnosed using Active MRI.

“Both problems could be clearly recorded and visualized using the new technique,” said Szabo.

Active MRI was developed by radiologist Robert Boutin and medical physicists Abhijit Chaudhari and Michael Buonocore in conjunction with Szabo, who saw the need to improve imaging of joints and bones for accurate diagnosis and to guide surgery.

A typical MRI exam obtains sets of images in three-to-five minute time blocks. Any movement during that time blurs the images.

“Routine MRI provides exquisite details, but only if the body is completely motionless in one particular position,” said Boutin. “But bodies are made to move.”

While MRI had been used to show limited movements of the jaw, further refinements were necessary to apply it to a joint as complex as the wrist. The UC Davis team adjusted the standard technique to capture a new image every 0.5 seconds. Specialized pads were employed to stabilize the magnetic field and reduce signal dropoffs. And a unique harness was built to hold the forearm in place, while leaving the hand free to move through a variety of common positions such as waving, rotating and clenching. 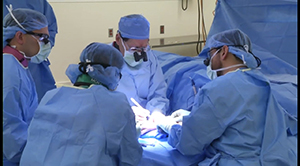 Surgeon Robert Szabo (second from right), a leading specialist in repairing hand and wrist injuries, saw the need to improve imaging of joints and bones for accurate diagnosis

The outcome is dynamic images of the wrist and its many moving parts in about 35 seconds.

“Active MRI provides a detailed and ‘real-time’ view of the kinesiology of the wrist in action using a widely available and safe technology,” said Chaudhari.

The team’s next step is to share Active MRI with the broader world of physicians and patients. They also want to develop similar techniques for knees, shoulders and other body structures. And they want to use it in research to determine, for instance, why women are more prone to some orthopaedic injuries than men.

“There really isn’t any limit to its applications,” said Boutin. “Our job now is to get the word out that it is both possible and available.”

Now that she has an accurate diagnosis, Wilson can make an informed decision about treatment, which includes conservative and surgical options.

“Even though I need more treatment, it is really nice to finally have answers,” she said. “And it was wonderful to be part of something new and help UC Davis break new ground.”