Research to focus on stress levels of patients, families and dogs 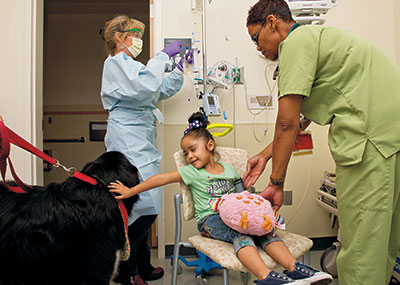 Zoey Vega reaches out to greet her therapy dog Angus during her treatment session.

Four-year-old Zoey Vega was scared when she started chemotherapy last month for kidney cancer. But two Thursday visits with a furry friend seem to have eased her fears.“She tells everyone she has a dog named Angus,” says Corina Vasquez, Zoey’s mom. “She talks about him all the time. The dog takes her mind off chemo.”

Zoey is among a select group of young patients at the UC Davis Comprehensive Cancer Center who is part of a novel study examining the effects of animal-assisted therapy on patients, their families and the therapy dogs themselves.

UC Davis is one of five children’s hospitals in the U.S., and the only in California, participating in the 12-month clinical trial, pioneered by Zoetis Inc., an animal pharmaceutical company, and the American Humane Association (AHA).

Animals have long been known to play a vital role in promoting the health and well-being of human beings, says pediatric hematologist and oncologist Anjali Pawar, the cancer center’s principal investigator on the study. It’s unclear, however, if animal-assisted therapy can help reduce stress for children and their families during the childhood cancer experience — or how that therapy affects the animal itself. The UC Davis Comprehensive Cancer Center aims to find out through the Canines and Childhood Cancer Study. 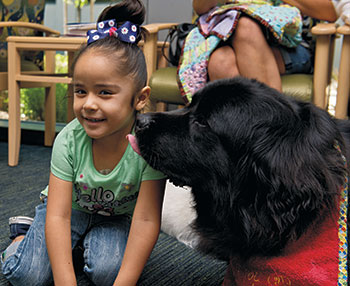 “We are hoping to show that animal therapy helps reduce stress in children and their parents, while inflicting minimal distress on the dogs,” says Sandra Maline, a pediatric social worker who is coordinating the research. “This is also the first study of its kind to look at the cost to the animal.”

The research focuses on newly diagnosed children ages 3-12 who receive regular chemotherapy at the pediatric outpatient infusion center. All study participants are tested for stress before and after their clinic visit. Children randomized to the study group spend time with a therapy dog once a week in the outpatient clinic over the course of four months. Children in the control group who do not get visits from the dogs during their appointments also are tested for stress levels using a standardized questionnaire and a vital signs check.

To gauge stress in the dogs, researchers collect saliva samples and test them for cortisol, a stress hormone. Parents’ stress levels also are evaluated. All patient encounters are videotaped, and videos are reviewed to see if the dog’s behavior indicates stress.

Zoey’s smile suggests the visits with Angus are having a beneficial effect – at least on her daughter, says her mom.

“Oh, she loves the dog,” she says. “Now, she gets excited about Thursdays.”