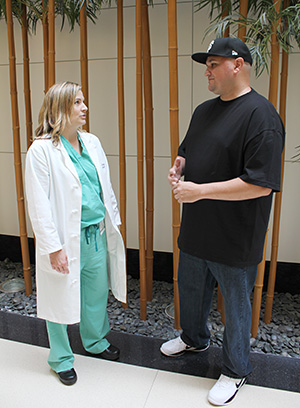 When Stanley Williams arrived in the emergency room at UC Davis Medical Center last summer with a massive gunshot wound to his chest, his life was in jeopardy.

Thanks to the expert care and advanced technology available at the medical center, the U.S. military veteran survived his wound and continues to recover while waiting to resume his training for a culinary career.

Williams later learned that his brother, Doug, contributed to his recovery. During his stay at the hospital, Stanley Williams required a highly specialized medical device called extracorporeal life support (ECLS), which oxygenates the blood outside of the body.

Years earlier, Doug Williams had been hospitalized at UC Davis following a serious car accident. Following his hospital stay, a group of Sacramento radio stations raised money to support the ECLS program, and Doug, a radio host at one of the stations, played a key role in the fundraising drive.

“I knew that he had done some fundraising for the medical center,” Stanley Williams said of his brother. “But I didn’t know it was for those machines. It was a pretty cool feeling to find out that he had helped purchase something that helps keep people alive.”

Wendy Ziegler, a fellow in trauma surgery, was on call when Stanley Williams arrived at the medical center. Initially, he was alert and talking despite the large gunshot wound to his chest.

The wound was 4 centimeters in diameter. In contrast, most gunshot wounds are around 1 centimeter, about the size of a pen. The wound was so large that air was entering Williams’ body through that opening instead of his trachea.

Concerned about his decreasing oxygen levels and difficult breathing, the team inserted a chest tube, which filled up with blood. A CT scan showed right rib fractures and multiple, scattered foreign body material. Not only was there was no exit wound, but no bullet — just missile fragments over his chest, along with significant lung contusions.

Saved by his sternum

In the operating room, Ziegler and attending surgeons Edgardo Salcedo and Joseph Galante explored the wound and found that Williams’ injuries could have been much more severe.

“His sternum saved his life,” Ziegler said. “The bullet appeared to have bounced off his breastbone and nail his right lung, but it didn’t hit his heart, left lung or any other important structures.”

"He basically walked out. Stanley is a miracle."

Williams still had profuse bleeding, decreasing blood pressure and a shattered right lung. The surgical team essentially removed the entire middle lobe of the affected lung, and a portion of the upper lobe. The surgery stabilized Williams and he was moved to an intensive care unit. About 36 hours later, the team returned to the operating room to permanently close his chest wound.

“He was doing great,” Ziegler said. “And no sooner did I literally walk out to his family to tell them how wonderfully he did, than I was paged because his oxygen levels began dropping again.”

The surgical team rushed back in, but every measure they attempted failed. Finally, trauma surgeon John Anderson requested an evaluation for ECLS — a last-resort measure.

Machine takes over for the body

ECLS involves a specialized machine that essentially takes over the function of the heart and/or lungs when a body’s own system fails due to injury or disease. It provides the body with oxygenated blood and the time needed to heal — anywhere from a few days to a few weeks — while protecting the organs from further damage. ECLS is most commonly used with neonates and children than with adults.

“ECLS is not routinely used in trauma surgery,” said Ziegler. “There may be only a dozen patients per year who are candidates for ECLS and the mortality rate is upwards of 50 percent or higher. Only Level I trauma centers like UC Davis, working in conjunction with our pediatric intensive care team and our cardiothoracic surgery services, can provide this kind of technically advanced rescue intervention.

“That’s why UC Davis is a leader in trauma surgery. Stanley’s case illustrates our multidisciplinary approach to severely injured patients.” 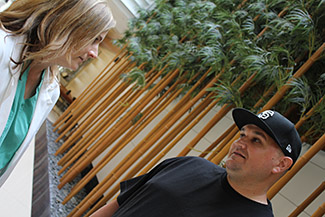 Williams remained on ECLS for a little more than a week, stabilizing and healing, while the ICU team began to slowly “wean” him off.

There were minor setbacks with a blood clot, but then he “basically walked out,” Ziegler said. “Stanley is a miracle.”

Williams, a father of three who had spent more than six years in the military, had just begun classes at Le Cordon Bleu, reimagining his future in the culinary arts. His education is on hold while he recovers, but he’s taking it day by day, and has an immense appreciation for all the UC Davis staff.

“They all created a real trusting atmosphere,” Williams said. “Because of what they did and how they did it, they deserve all the recognition they can get.”

The ECLS program began in July 2005, after a cluster of radio stations organized a radiothon to raise money for UC Davis Children’s Hospital and Children’s Miracle Network. The annual event — a three-day, three-night on-air drive — has raised almost $3 million in 10 years.

Doug “Lazy” Williams was a host at one of the participating stations, The End 107.9. The car crash that landed him in the hospital in several years ago paralyzed another occupant in the car and left Doug with chronic back pain.

Since 2005, UC Davis Medical Center has performed about 20-24 ECLS cases per year, the majority of them neonates. But training has been extended so that adult patients like Williams can also benefit.

“The mission of Children's Miracle Network is connecting and inspiring community support for the healthiest children and families we are privileged to serve,” said Mills. “Doug and his efforts show how you can improve lives and transform health care through innovation. Amazing!”