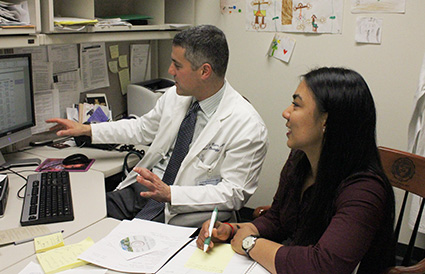 Khat Naing first became aware of UC Davis while she was an undergraduate student at UC Santa Cruz, where she met friends who were from the city of Davis.

Those acquaintances eventually would lead her to the most recent meeting of the Academic Surgical Congress, held in February in San Diego. There, Naing delivered an oral presentation on the effect of radiation therapy combined with surgery on a rare form of cancer that usually occurs near the joints of the arm, neck or leg.

As a pre-med student in the UC Davis Department of Surgery’s Pre-Medical Surgical, Internship and Mentorship Program, Naing worked with UC Davis surgeon Robert Canter on a research project on synovial sarcoma. At the Academic Surgical Congress, Naing’s youth and novice status stood out.

Although Naing said her participation at the gathering was “fun,” she added, “It was horribly intimidating. I did not see any other pre-med students there. It was mostly physicians and Ph.D.s.”

Naing said that because the other attendees were expressionless during her presentation, she could not gauge their reaction.

"It is extremely unusual for a pre-medical student to be the first author on an original research project and what is anticipated to be a peer-reviewed research publication."
— Robert Canter

Afterward, however, “They said very encouraging things to me,” Naing said.

In their study, Naing, Canter and the rest of their research team found that the survival rate among patients with synovial sarcoma is improved when radiation therapy is used along with surgery in their treatment. Their manuscript about the study, on which Naing is the lead author,is in progress.

"It is extremely unusual for a pre-medical student to be the first author on an original research project and what is anticipated to be a peer-reviewed research publication," said Canter. "But Khat has shown laudable initiative and interest in this project. I wanted her to experience both the accolades as well as the responsibilities of being first author, and she has risen to the task.

"She is highly motivated and diligent, and I think she has a bright future."

As exhilarating as Naing’s presentation at the Surgical Congress was, it was just the latest remarkable event in her life’s journey. It includes her family having to flee their native homeland of Burma (now Myanmar) due to the recurring genocide of indigenous Muslims that has afflicted the country for decades. In fact, because Naing’s full first name, “Khatija,” is common among Muslims, she had to use a more traditionally Burmese name for school.

The UC Davis Pre-Medical Surgical Internship, Mentorship, and Research Program is a unique and rigorous experience that exposes participants to the field of surgery by immersing them in a professional medical environment. Click here to learn more about this program.

Because Naing’s parents had been relatively well-off in Burma, she had taken some English classes there, but not enough to become fluent.

Naing and her family left the country when she was 10, in 1999. They lived in Malaysia for two years before moving to the Los Angeles area on Sept. 7, 2001, mere days before the terrorist attack on the World Trade Center in New York.

“The adjustment was not as bad as I expected,” Naing said. “We had risked everything and spent all of our resources to escape, but that was OK. The worst part was being in middle school and being asked why I was a terrorist, and trying to explain that we left because Muslims were being killed in Burma.”

As a child in Burma, Naing gained an appreciation for the necessity of health care for all. Many family members on her mother’s side have a history of heart problems, much of which could have been prevented by valve replacements or other procedures. However, in Burma, the “inefficient health-care system is predominantly reserved for the wealthy,” Naing said.

At UC Santa Cruz, Naing had a roommate with leukemia, providing her first exposure to the impact cancer has on a person.

“The headaches, the pain, the chemo side effects and the emotional impact were more than anything a college student should have to suffer,” Naing said.

After graduating and moving back to Los Angeles, Naing became a volunteer research assistant at the University of Southern California Children’s Hospital. The experience taught her a great deal about leukemia and how to design experimental assays. Still, Naing had wanted to remain in Northern California.

When she learned about a conference scheduled for UC Davis, recollections of her former UC Santa Cruz classmates from Davis led her to attend. In September 2012, she moved to Sacramento to enroll in Pre-Medical Surgical, Internship and Mentorship Program. After observing a urology case on which Canter provided a consultation, Naing asked him about research opportunities, which led to her working with Canter on his study of synovial sarcoma.

Naing’s ambition is to become a surgeon, and she plans to apply for admission to the UC Davis School of Medicine. If accepted, she will be part of the class that starts in the fall of 2015. Her experiences at UC Davis motivated Naing’s desire to continue the association.

“Everyone is so hard-working and brilliant, so devoted,” Naing said. “They devote so much time caring for patients and perfecting their skills.”