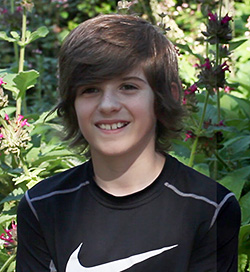 Ian Ljohki was diagnosed with a joint disorder osteochondritis dessecans, but is now able to return to sports.

When 10-year-old Woodland athlete Ian Ljohki began experiencing sharp pain in his knee while running, it stopped him in his tracks.

Ljohki was referred to UC Davis Sports Medicine Clinic’s sports medicine physician Mo Mortazavi, who diagnosed him with osteochondritis dissecans (OCD), a joint disorder which was causing the bone beneath his cartilage behind his knee to gradually wear down.

“We didn’t know if he would be able to play sports again,” said Ian’s mother Deanna Ljohki. “But Dr. Mortazavi and the UC Davis Sports Medicine Clinic was great. We felt like we had plenty of information and understood what he needed to do."

View video on Ian's recovery and return to playing sports

Ljohki spent more than six months in rehabilitative therapy and gradually returned to sports when he was pain free.

"He has done great,” said Mortazavi. “It’s hard to ask a child not to play for more than six months, but he was really diligent and his hard work paid off.”

Ljohki received full clearance to return to sports and is back playing with his travel baseball team, the Woodland Patriots, and in little league this spring.