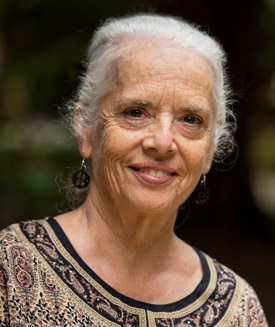 Eileen Thatcher is a citizen of the world. She routinely transits between visits with family and friends in California and her new home in Southern India, where she teaches nurses how to reduce the risk of hospital-acquired infections in a world-class hospital that treats patients from the Middle East, Africa and beyond.

But Thatcher, an emeritus professor of infectious diseases at Sonoma State University and a UC Davis alumna, made perhaps the biggest journey of her life in April, when she traveled from a remote mountaintop in rural Humboldt County to UC Davis Medical Center for the emergency neurological surgery that would save her life.

A headache that felt 'like a grenade going off'

Thatcher is a slight, slender woman with long white hair, pulled up on top of her head in a graceful bun. She has dark, quick eyes and a ready smile. She and her sister were visiting her mother’s remote mountain home in Fieldbrook, north of Arcata, Calif., on the evening of April 6. For about three days she had been fighting what she believed to be a nagging migraine.

“I was dealing with the pain,” Thatcher said. “But I realized that the headache just was not going away. I opened the bottle where I carried Tylenol® and the aspirin that I take when I’m flying from India. An aspirin just happened to fall into my hand instead of Tylenol and I remember thinking, ‘I can’t take that. I might have an aneurysm.’”

Thatcher described the experience while recovering in her hospital room at UC Davis Medical Center. She noted that she didn’t know why the word "aneurysm" popped into her head. But, deciding that Tylenol would not be sufficient, she instead took a Vicodin® to relieve the surging pain and sat down to dinner with her mother and sister.

The Sacramento Brain Aneurysm and Arteriovenous Malformation Support Group helps individuals who have experienced an aneurysm and their loved ones to understand their treatment and recovery. The group provides detailed information about aneurysm care, as well as hospital visits, telephone support and monthly meetings. Meetings are held on the fourth Saturday of each month from 3 p.m. to 5 p.m. at the Lawrence J. Ellison Ambulatory Care Center on the Sacramento campus of UC Davis. It is not necessary to be a UC Davis patient to participate.

The group’s next fundraising event is a five-kilometer Walk for Life on Oct. 26, starting at 9 a.m. on the West Steps of the State Capitol. The Sacramento group is affiliated with the Brain Aneurysm Foundation and the Aneurysm and AVM Foundation. For further information, call Christi DeLemos in the UC Davis Department of Neurological Surgery at 916-734-6513 or send her an email.

“We had started to eat and then, all of a sudden, there was this pain that came crashing down on top of my head — whoosh!” Thatcher said. “It was so intense. On a scale of one to 10, it was a 15 at least. It was like a grenade going off.”

Thatcher remembered that, as the pain intensified, she slumped forward in her chair. Moments later, she would find herself face down on the home’s cold stone floor. She recalled that her mother must have pushed the button on her Lifeline® Medical Alert lanyard because, within minutes, paramedics were at the family’s door to transport her to the nearest hospital, Mad River Community Hospital in Arcata.

Upon arrival at the hospital, Thatcher said that she was whisked off for a computed tomography — or CT — scan. The results prompted the emergency room physician there to immediately get on the phone and call tertiary care hospitals throughout Northern California, seeking the best neurosurgery expertise available. Once the doctor confirmed Thatcher’s destination, he alerted the air ambulance and told the waiting paramedics: “Davis. Go!”

Thatcher was immediately flown to Sacramento and transported to the medical center’s emergency department. She was admitted shortly after midnight and would only awaken hours later in the medical center’s Neurological Intensive Care Unit, recovering from a procedure to obliterate an aneurysm.

Thatcher recalled that one of the first things she did after she woke up was reach up to place her hand atop her head. She was pleasantly surprised and remarked, “I have hair!” Thatcher said that she isn’t vain, but she expected to have had her head shaved to treat the aneurysm. But, for the most part, these days aneurysms are not treated that way.

Thatcher’s lifesaving neurosurgeon was Ben Waldau, assistant professor in the UC Davis Department of Neurological Surgery and a specialist in open cerebrovascular and endovascular treatment of cerebral aneurysms. He said that Thatcher had experienced a ruptured aneurysm at the base of her brain behind her right eye — a posterior communicating artery aneurysm.

What is an aneurysm?

An aneurysm is a localized, blood-filled, balloon-like bulge in the wall of a blood vessel. Cerebral aneurysms are fairly uncommon, experienced by about 2 percent of the population. Aneurysms are abnormal weak spots in the blood vessel wall that cause a pouch to form. 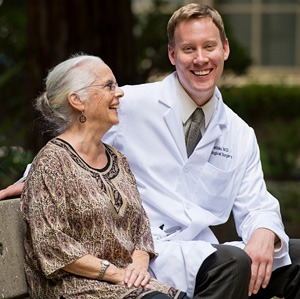 Eileen Thatcher and Ben Waldau, a specialist in open cerebrovascular and endovascular treatment of cerebral aneurysms.

Waldau treated Thatcher’s aneurysm in the hospital’s interventional neuroradiological suite using endovascular coiling. During the minimally invasive procedure, a surgeon inserts a sheath into the femoral artery in the groin, using fluoroscopy to guide a catheter through the blood vessels up to the aorta and to the carotid artery in the neck. Then a microcatheter is used to enter the aneurysm in the brain. Inside the aneurysm, the surgeon deploys a series of tiny metal wires called coils. Thatcher received bare platinum coils. Inserting the coils causes the patient’s blood to clot around them, blocking the flow of blood to the aneurysm and closing it off. The coils are then detached using an electrical current.

“Early on I was unsure of whether Dr. Thatcher would recover quickly from her bleed,” Waldau said. “She was very sleepy and was slow to follow commands. But she started to awaken and become more oriented as her condition continued to improve over the following two days.”

Thatcher eventually would become the model patient, Waldau said, sitting up in bed and even conducting business meetings by telephone from her hospital room. Today, she continues her remarkable recovery at her mother’s home (she does not maintain a home in the United States) and is looking forward to returning to her work at the Amrita Institute of Medical Sciences in Kerala, India, sometime this month.

“It was a great pleasure taking care of Dr. Thatcher, especially because she’s a UC Davis alumna,” Waldau said. “She was a fantastic patient. It really is a joy to be able to help patients like her. Now she is able to go back to her life and help people in India and all over the world.”