It used to be the remnants of the old state fairgrounds that more than three decades ago comprised the university’s Sacramento campus.

And, now, in the middle of all that, the university is developing the Larry N. Vanderhoef Commons, fulfilling a recommendation of the Sacramento campus’s 2010 Long-Range Development Plan, which called for “a large green quad or other major open space typically associated with an academic institution.”

The plan envisioned this open space as “the focal point and main gathering place for campus … for formal events such as graduation ceremonies and Thank Goodness for Staff luncheons, as well as daily uses such as studying, meeting or relaxing.”

The Vanderhoef Commons will be developed in phases, starting with a 1.5-acre oval southeast of the Education Building (on X Street).

Mike Boyd, executive director of the Facilities Services Division at the UC Davis Health System, said the construction time line runs from August to November. The cost of Phase 1 is estimated at $750,000, to come from health system operations.

There is no time line for Phase 2, a southward extension to Second Avenue. The research and clinical lab buildings lie to the west of the planned extension, and a parking lot is on the east side, along 48th Street. 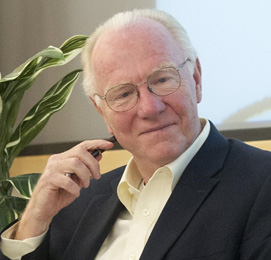 Phase 1 will turn a dirt lot into grass and trees — not in a quad shape, but as an oval — covering about 1.5 acres, part of the area that used to be the state fairgrounds. Construction is expected to start in August and be finished in November.

The commons will be for everyone to enjoy: UC Davis Health System staff and visitors, the public, and School of Medicine and Betty Irene Moore School of Nursing faculty and students.

Situated almost in the middle of the 149-acre campus, the commons will be emblematic of Vanderhoef’s central role in the land’s transformation into the UC Davis Health System, and in shaping its mission.

“We’re here to honor Larry because he advanced the health system’s ability to improve lives and make a difference in the world,” Thomas Nesbitt, interim vice chancellor of Human Health Sciences and dean of the School of Medicine, said during the groundbreaking celebration July 1.

"But he also set in motion an attitude and culture that continues to guide us today,” Nesbitt said. “He helped create a culture that embraces diversity, respect and compassion.”

Vanderhoef’s health system leadership spanned 25 years, first as provost and executive vice chancellor (and the medical center's one-person governing body), and then as chancellor, until he stepped down in 2009.

A soft spot for nurses

More than 100 people — including professors and others who worked with Vanderhoef at the health system, and administrators from the Davis campus — attended the celebration. It began with a program in the Education Building, moved outside for a quick turn of the golden shovels and concluded with a reception in the Center for Health and Technology.

“I will always have a mental image of him visiting our emergency department, the old one, on an evening shift, and observing the triage and the trauma rooms,” she said. “And he sat there and he watched, and said he could better comprehend the enormity of the county’s poorest coming here, arriving here on our doorstep for care.

Watch a video of the tributes made during the groundbreaking celebration for
Larry N. Vanderhoef Commons

“From a personal perspective,” Robinson said, “I will always be grateful for his support of the nursing school, and how he never wavered from the goal of developing one.”

Robinson never wavered, either, said Vanderhoef, who presided in March 2009 when the university announced the $100 million gift that would establish the Betty Irene Moore School of Nursing.

Vanderhoef admitted, in his remarks, to having a soft spot for nurses — in that his mother was a nurse. Then, earlier this year, he had an experience that allowed him to see UC Davis nurses and other health care personnel in action, after he suffered a stroke and spent six weeks in the UC Davis Medical Center.

“I was very impressed, I was impressed with the docs and neurologists, primarily, the therapy staff, the nurses … The nurses were so important and so good, I mean they are just great,” Vanderhoef said.

Nesbitt offered his own story of Vanderhoef’s commitment, in this case to Nesbitt’s endeavors in telemedicine, whereby specialists like those at UC Davis use communications technology to monitor and consult on cases remotely — providing the expertise that is not always available outside of major health-care centers. With telemedicine systems, the “outside” specialists have access to real-time patient data and can connect with doctors and their patients by videoconference.

Of course, Vanderhoef had plenty of good ideas himself. Take, for example, his proposal, upon his inauguration as chancellor in 1994, to build a performing arts center — a proposal that resulted in the Mondavi Center.

Nesbitt’s “good idea” flourished into the internationally recognized Center for Health and Technology, which provides telemedicine services and deals with three other components of telehealth: education, innovation and research. 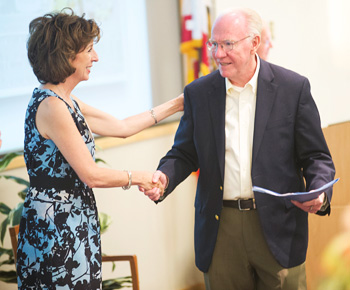 More than a confluence of buildings, it is a “crossroads (that) really brings people and programs together in a way that I don’t think any of us would have really been able to see” if not for Vanderhoef’s vision and excitement, said Fred Meyers, executive associate dean of the School of Medicine.

And soon this crossroads will have an added link, to and from the Vanderhoef Commons — an honor for which Vanderhoef expressed his deep appreciation.

The chancellor emeritus credited a “great team of people” — mentioning many of them by name — who, through their work, built the health system into the stellar institution it is today, and allowed him and his wife to make a difference at UC Davis.

“It’s been wonderful for Rosalie and me,” Vanderhoef said. “We did some great things, and this medical center is one of them, and for that reason I’m very proud that my name is going to be here for people to remember.”

Chancellor Linda P.B. Katehi, who succeeded Vanderhoef, described UC Davis Medical Center and its wonderful buildings, its tremendous quality of care, and the faculty, staff and students as “an amazing contribution” to Sacramento, the state and the nation.

“Larry’s leadership and the leadership of those who were around him drove the university to be where it is today,” Katehi said.

“It’s a great privilege for me to be a chancellor in a place that has done so much, and to really recognize Larry’s and Rosalie’s contributions — there have been so many, not just to this institution and to its faculty, students and staff, but also to the community,” Katehi said.