About the UC Davis Transplant Center 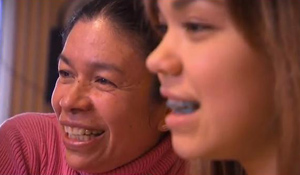 Bernice's mother Maria was a perfect match and donated one of her kidneys to her daughter.

Working hard to address such daunting needs, the UC Davis Transplant Center has become one of the nation’s top sites for kidney transplantation. Its program, which received an excellence award in 2012 from the independent firm HealthGrades for superior clinical outcomes, is now the fourth-largest program of its kind in the nation.

The most recent statistics from the National Kidney Foundation indicate that there are more than 118,000 people waiting for lifesaving organ transplants around the country. A vast majority of those individuals are in need of new kidneys. In an 11-county region surrounding UC Davis Medical Center and covered by the organ donor network Sierra Donor Services, more than a thousand people now await lifesaving transplants for heart, liver, lung, kidney, intestine and pancreas. Locally and nationally the need for organs far exceeds the number of donations.

The center offered the type of comprehensive expertise that young Berenice Jasso needed several years ago when a challenging illness became life-threatening and, ultimately, could only be cured with a new kidney. For nearly two years, the then-13 year old and her family lived in fear that at any moment Berenice could lapse into convulsions, wake up blind, fall into a coma or lose her memory because of the illness.

Lavjay Butani, a UC Davis specialist in pediatric kidney disease, helped identify Berenice’s condition and determined that she needed a transplant. Fortunately, in Berenice’s case, a donor was easily found. Her mother, Maria, turned out to be a perfect match and able to donate one of her kidneys.

Watch a video story of Berenice Jasso's illness and her miracle recovery.

For more than a decade, UC Davis has been making significant strides in transplantation, especially with living donors like Berenice’s mother. It is one of the select hospitals in the nation that offers the minimally invasive surgical procedure known as the single-port nephrectomy. The technique enables surgeons to remove a donor kidney through a tiny incision that leaves a barely noticeable scar and usually offers shorter recovery times for patients. In recent years, the transplant team also has advanced therapies in desensitization and paired-donor exchanges, which have made it possible to transplant kidneys from living donors who previously would have been incompatible.

While innovation and experience distinguish the transplant program and its professional team, the benefit to those in need of a new organ transplant is perhaps best reflected by consistently high patient satisfaction and patient outcomes. Combined with the shortest average wait times in Northern California and significantly better-than-expected waitlist mortality, transplant recipients like Berenice Jasso are literally living proof of the commitment to excellence at the UC Davis Transplant Center.