Mapping the future of health

How data and digital maps help us advance health for all 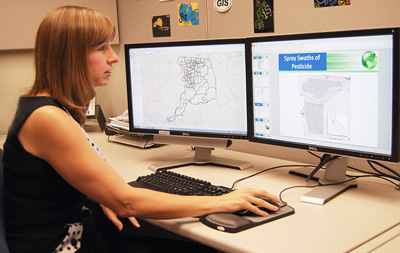 Este Geraghty views some of the GIS mapping data she used for her recent West Nile virus study.

Este Geraghty spends much of her time looking at maps. Not your everyday Google Maps, but complex, multi-layered geographic charts illustrated using enormous amounts of data from a variety of sources. In the research world it’s referred to as “spatial epidemiology and geographic information systems (GIS).” As a physician at UC Davis and as a deputy director focusing on health statistics and informatics with the California Department of Public Health, Geraghty’s work focuses on using the latest mapping technologies and data collection to better understand and address the interplay between health and the environment.

Recently, for example, Geraghty and a team of researchers used GIS mapping tools to produce what is believed to be the first public health study of the aerial mosquito spraying method for preventing West Nile virus. The study analyzed emergency department records from Sacramento area hospitals during and immediately after aerial sprayings in the summer of 2005.

Correlating patient information with the flight-path data enabled the team to determine there was no increase in specific diagnoses that are considered most likely to be associated with pesticide exposure, including respiratory, gastrointestinal, skin, eye and neurological conditions. The study appeared in the May-June 2013 issue of Public Health Reports.

“The research tools and technologies we now have are enabling us to identify new ways to avoid harm, improve care and advance health for all. Our West Nile study is only the beginning.”
— Este Geraghty

“Unfortunately, West Nile virus is endemic in California and the United States, and the controversy of mosquito management will likely arise every summer,” says Geraghty, an associate professor of clinical internal medicine and lead author of the study. “Findings from studies such as this one help public health and mosquito control agencies better understand the risks and benefits of their practices.”

West Nile virus has become an increasingly serious problem throughout the country and may become more of a threat as the climate warms. According to the U.S. Centers for Disease Control and Prevention, West Nile virus is the leading cause of viral encephalitis in the United States. It is transmitted to humans and animals through the bite of an infected mosquito. Mosquitoes become infected with the virus when they feed on infected birds.

Geraghty’s unique study evaluated emergency room visits in Sacramento County hospitals on days that pesticides were sprayed as well as the three days following spraying. Spraying was done in north Sacramento over three nights, and in south Sacramento over four nights in August 2005. During the time of the study, an ultra-low volume of pyrethrin insecticide was used for spraying. The chemical is derived from an African chrysanthemum and acts by blocking chemical signals at nerve junctions in insects. It is the same pesticide used to treat head lice in children and to kill fleas and ticks in pets.

More than 250,000 emergency room visits were analyzed and stratified by 785 diagnostic codes. Emergency room visits were classified by specific diagnostic categories, including respiratory, gastrointestinal, skin, eye and neurologic diseases. Importantly, they found that exposure to aerial spraying was not associated with increased rates of emergency department visits for any of these conditions.

Geraghty notes that potential long-term effects of aerial spraying could not be addressed in her study and would be extremely difficult to investigate in human populations. She says it would be worthwhile to reproduce the study to analyze the possible short-term impacts of other pesticides and spraying techniques.

“This is an exciting and new approach to medical research,” she adds.  “Some refer to it as ‘geomedicine’ because it provides such an important vantage point from which to explore population health with more precision and accuracy. The research tools and technologies we now have are enabling us to identify new ways to avoid harm, improve care and advance health for all. Our West Nile study is only the beginning.”