45 Bing cherries a day may keep the doctor away 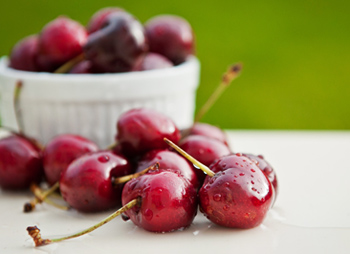 Adding 45 sweet Bing cherries to the diet each day has been shown to lower levels of a variety of indicators for chronic inflammatory diseases such as arthritis, high blood pressure, diabetes and cardiovascular disease, a small, in-depth study by researchers at UC Davis School of Medicine has found.

The researchers found that cherry consumption selectively improved circulating blood levels for nine biomarkers of inflammatory disease. The work suggests that cherries  may be an important addition to the diet to improve health, especially for individuals at risk for inflammatory diseases.

Researchers have increasingly linked chronic inflammation — the body’s immune response to injury, infection and other harmful stimuli that damage cells — to some of the most common diseases of aging. They also have associated reduced levels of certain biomarkers with reduced severity of symptoms.

For the UC Davis study, researchers asked 18 men and women aged 41 to 61 to supplement their diets with 45 Bing cherries, about 280 grams or nearly 10 ounces, each day for 28 days. All of the study participants were healthy but had modestly elevated levels of C-reactive protein, a biomarker for inflammation associated with an increased risk of cardiovascular and other diseases. (The normal range for C-reactive protein is less than 1 mg per liter. The elevated levels among participants ranged from 1 to 14 mg per liter.)

The researchers evaluated protein levels in fasting blood samples before, during and after cherry supplementation at days 7, 21, 35 and 63 to obtain baseline, intervention and post-intervention data. Using targeted proteomic arrays, they comprehensively measured changes in 89 known markers for inflammation, immune status, cardiovascular disease, blood clotting and liver and kidney function.

The researchers found that cherry consumption increased the level of Interleukin-1 receptor antagonist (IL-1Ra) — a known anti-inflammatory protein — by 27.9 percent and decreased concentrations for eight other biomarkers for disease. (see sidebar)

Cherry consumption had no effect on 67 other proteins evaluated, and 13 had levels that were below detection limits.

Understanding how certain components in food may play a protective role against inflammation is a growing area of research. Future research will focus on assessing the health effects of eating cherries in a larger group of  individuals with chronic inflammatory disease.

The study was published in the Journal of Nutrition and was conducted by researchers in the UC Davis Department of Human Anatomy and Cell Biology in collaboration with the Western Human Nutrition Research Center’s Agriculture Research Service, a division of the U.S. Department of Agriculture.

The research was supported in part by the U.S. Department of Agriculture, Agricultural Research Service, and the California Cherry Advisory Board.