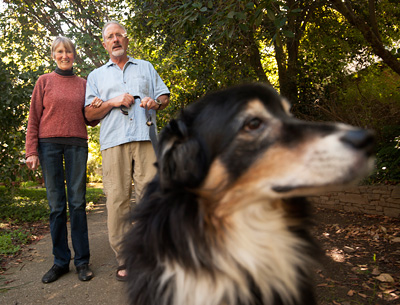 Virginia and Niels Cappel on one of their daily walks with Woody.

For seven months beginning in the fall of 2010, Virginia Cappel’s medical condition was touch-and-go.

The series of events that would change her life began simply, with flu-like symptoms, which Virginia and her husband Niels initially thought was bronchitis. But about a month later, when they left their home in Davis, Calif., for a vacation in the Midwest, Niels began to notice more ominous signs: disruptions in Virginia’s speech, a slower gait and confusion, such as associating the wrong words with activities.

An immediate trip to the emergency room ruled out a stroke, and during the next few weeks, the diagnosis would continue to shift. There was concern that she had bacterial meningitis, followed by viral meningitis. Finally, a neurologist diagnosed valley fever, a fungal infection that affects about 150,000 people in the U.S. each year and has been on the rise in California. According to the California Department of Public Health, the number of reported cases in California has increased six-fold, from about 816 cases in 2000 to more than 5,366 cases in 2011.

“The disease can be difficult to manage,” said George Thompson, an assistant professor of infectious diseases who specializes in the care of patients with invasive fungal infections and helps direct the Coccidioidomycosis Serology Laboratory at UC Davis. “Sometimes there’s a delay in diagnosis because the symptoms resemble common illnesses such as flu and bacterial pneumonia. And despite the frequency of valley fever for those living in endemic regions, few clinicians think of this disease early in the course of a patient’s illness.”

For Virginia, the infection was diagnosed after the fungus had spread to her brain, a rare condition called valley fever-induced meningitis. Niels and Virginia sought treatment from valley fever experts in Arizona, where the disease is more common, but no one could develop a cohesive treatment plan.

“Sometimes there’s a delay in diagnosis because the symptoms resemble common illnesses such as flu and bacterial pneumonia. And despite the frequency of valley fever for those living in endemic regions, few clinicians think of this disease early in the course of a patient’s illness.”
— George Thompson

While there, she had a shunt placed to relieve pressure in her brain, and a second surgery was performed to allow physicians to directly inject a potent medication known as amphotericin B into her spinal fluid. Despite attempts to control the raging fungal infection, Virginia got sicker and lapsed in and out of a coma. Unable to address her advanced infection and poor response to antifungal treatments, the Arizona hospitals advised Niels to find more advanced care elsewhere.

In December 2010, Virginia and Niels returned to California and sought answers at UC Davis Medical Center. After three months in the hospital, Thompson and a team of clinicians got Virginia’s condition under control.

“Fungal diseases are notoriously difficult to treat as the majority of patients with severe disease have little help from their immune systems,” said Thompson, who also is an assistant professor of medical microbiology and immunology. “Currently available antifungal medications are inadequate in the treatment of some of these infections and, as a result, high doses are required for a therapeutic response. Unfortunately, high-dose antifungal therapy may come with significant side effects to patients.”

“UC Davis did everything right,” Niels said. “We took her in on a gurney, and she walked out on her own.”

Found mostly in the western United States, valley fever is caused by the fungus Coccidioides immitis, which thrive as microscopic spores in arid soil. When the ground is disturbed by wind, construction, farming or other movements, the spores become airborne and can be inhaled. Once in the lungs, the warm body temperature cause the spores to morph into a spherule containing endospores, which are released, allowing the infection to spread within the lungs and to other parts of the body via the bloodstream.

Sixty percent of those exposed to the fungus do not develop symptoms or have mild flu-like symptoms that resolve on their own. But a very small proportion of people develop disseminated disease that causes chronic pneumonia, joint pain, fever, fatigue or meningitis, a potentially fatal infection of the membranes and fluid covering the brain and spinal cord. Physicians prescribe antifungal medications to prevent or manage these more advanced cases of infection.

While Virginia doesn’t remember any of the details of her bout with valley fever, she lives a comfortable life with the support of Niels, her close-knit family and circle of friends. The couple enjoys cooking, gardening, having friends over for dinner and taking walks. A gourmet cook before she developed valley fever, Virginia is now more the sous chef. 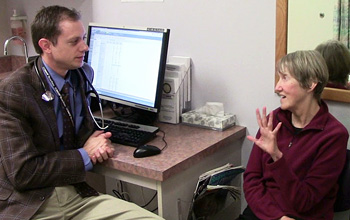 “The main difference for me since having valley fever is that I don’t have as much energy,” Virginia said. “I used to be able to get up early in the morning, go through the whole day and into the night before going to sleep. Now I have to take naps or rest sometimes. I think I’m doing better. I’m not fine, but I’m better.”

Virginia’s condition remains under control, thanks to regular check-ups with Thompson and the watchful eye of Niels, an entrepreneur who retired from the medical diagnostics industry and has been at Virginia’s side throughout the ordeal. From Virginia's first symptoms of disease through her getting successful treatment at UC Davis, the couple spent seven months in seven different hospitals.

“If it hadn’t been for Niels, I don’t think that I would have made it,” she said.

Virginia will live with valley fever for the rest of her life until new treatments are developed that reduce the severity and duration of the illness or completely eliminate the fungus from the body.

“About one percent of those with valley fever develop the chronic version and must remain on antifungal medications to prevent recurrent bouts of infection,” Thompson said. “We don’t know why that happens, though it’s probably a genetic predisposition.”

Unfortunately, for patients like Virginia, medication choices are limited. While amphotericin B can be quite effective, it’s also extremely toxic and painful to administer. Other medications are less toxic but also are less effective. To complicate matters further, there are so few chronic cases of the disease that pharmaceutical companies have very little incentive to develop more effective treatments.

“There’s only a limited number of drugs, and it’s a really scary thing,” Niels said.

Thompson is hoping to change that. He is leading research efforts at UC Davis to better understand valley fever.

“We’re interested in why some people get terrible disease and others clear it by themselves,” Thompson said. “How is the immune response determined by individual genetics?”

To answer these questions, Thompson’s team is using genomic sequencing to study healthy people, as well as those with acute and chronic valley fever. By determining the genetic distinctions between these groups, he hopes to find new ways to target the disease.