UC Davis pathologist Bennet Omalu is featured in the Frontline documentary, which "investigates how, for years, the league worked to refute scientific evidence that the violent collisions at the heart of the game are linked to an alarming incidence of early-onset dementia, catastrophic brain damage and other devastating consequences." The report was produced by Frontline and award-winning journalists Mark Fainaru-Wada and Steve Fainaru of ESPN. Click here to view the documentary online at PBS.org.

UC Davis pathologist and chief medical examiner of San Joaquin County Bennet Omalu discovered the devastating neurological disease known as chronic traumatic encephalopathy (CTE) in the brain of the Pittsburgh Steelers legend Mike Webster in 2002. An excerpt from the documentary titled "The Autopsy That Changed Football" describes his discovery.

Bennet Omalu began investigating brain tissue changes in athletes when he was working as a young pathologist in the Allegheny County coroner's office in Penn. back in 2002.

At the time, he was assigned to conduct a routine autopsy of Mike Webster, a Pro Football Hall of Famer who died at age 50 from a heart attack and had been suffering from dementia, depression and chronic pain and was living in his pickup truck.

Puzzled by the lack of a physical explanation for Webster’s mental decline using the pathologist’s standard tools of visual inspection and CT and MRI scans of the brain, Omalu obtained permission from the family to conduct a microscopic analysis.

After methodically studying slides of brain-tissue sections for months, he eventually uncovered the protein deposits scattered throughout key regions of the brain that would characterize CTE. These deposits block communication in brain regions that oversee mood, emotions and executive functioning.

Since Omalu published his landmark findings from Webster’s autopsy in the Journal of Neurosurgery, he has found similar results in the autopsies of many other professional and amateur football players and wrestlers. His work has set off a bitter feud between the NFL and their athletes and a national debate on preventing brain injuries in athletes playing high-impact sports. It also has inspired other researchers to develop a brain scan that can identify signs of the crippling disease in living NFL players.

A humbling and overwhelming experience

Reflecting on his discovery of CTE, Omalu is grateful that the finding is helping others.

“Like most advances in the medical sciences, my encounter with CTE was serendipitous,” Omalu said. “I was only driven by my inkling as a forensic pathologist to search for evidentiary foundations for everything, since coincidence should never be an answer in the investigation of death.

“I have been extremely humbled but overwhelmed by the attention that I have received and the advances my innocent work has inspired,” he continued. ”I was only an inexperienced and young medical examiner who had just completed fellowship training in neuropathology, and I had this laughable, naïve and idealistic intellectual curiosity that has luckily turned out to significantly impact the lives of many." 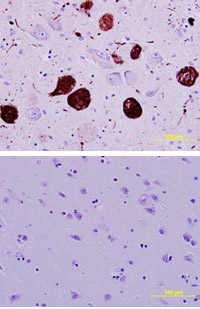 “The inherent risk and dangers of permanent brain damage in contact sports are real especially in children,” he said. “We must educate ourselves, especially parents, of this risk and the long term effects in later life.”

Born in Nigeria, Omalu received his medical degree from the University of Nigeria in 1991, a master’s degree in public health from University of Pittsburgh in 2004 and a master’s degree in business administration from Carnegie Mellon University in 2008. He is board-certified in five medical specialties and subspecialties, including anatomic pathology, clinical pathology, forensic pathology, neuropathology and medical management. He also is a certified physician executive.