Two passengers, one emergency, and a grateful patient 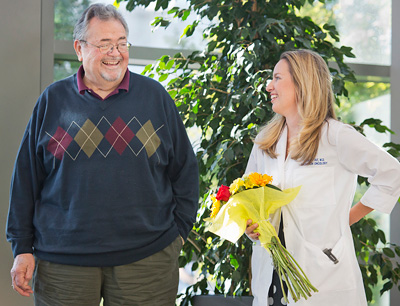 Gary Cooper presents Dr. Lauren Tait with flowers as a token of his appreciation for the medical assistance she provided him. © UC Regents

Lauren Tait was on the last leg of her return flight to Sacramento from Atlanta, where she had been learning about advances in radiation oncology. Gary Cooper was heading home with his wife Kathi, and close friends Jack and Marilyn Scheidgger, after a beautiful trip that began in Quebec and ended at Niagara Falls. The two passengers might never have met if Cooper, 70, hadn’t collapsed on board the Southwest Airlines jet.

Tait, a third-year radiation oncology resident at the UC Davis Comprehensive Cancer Center, was quick to assist. The 29-year-old had helped another distressed passenger less than a year earlier, also during a return flight from a medical conference.

This time, though, it was more serious. Cooper’s wife, Kathi, called for help after her husband complained that he couldn’t stand up and then fainted. Flight attendants summoned medical assistance.

“When I woke up, she said, ‘I’m a doctor,’ ” Cooper said of Tait. “She responded so quickly. She was there immediately.”

Cooper complained of weakness in his legs, and his skin was clammy. “His pulse was palpable but faint,” Tait said. “We gave him oxygen and aspirin.” Another passenger, a nurse, also came to his aid, and gradually Cooper’s vital signs improved.

But about 20 minutes later, just after flying over the Denver, Colo. area, Cooper’s condition deteriorated. His blood pressure and heart rate dropped. Tait, the nurse and flight attendants got Cooper reclined across three passenger seats. The nurse started an IV to get Cooper fluids to stabilize his blood pressure. Another passenger held the bag of saline over Cooper.

“She never left my side. She was standing between me and the row of seats in front of us, and she was there until the plane landed. She would not leave me.”
— Gary Cooper

Tait grew worried that the grandfather of three might be suffering a life-threatening pulmonary embolism. Because the trip home to Sacramento would last more than two hours, she asked the crew to land the plane.

As Denver was the closest airport, the pilot headed back east. The 30-minute flight was bumpy; the pilot told the passengers to stay in their seats and to fasten their seatbelts. Tait remained hovering over Cooper.

“She never left my side,” Cooper said. “She was standing between me and the row of seats in front of us, and she was there until the plane landed. She would not leave me.”

As the plane approached the Denver airport, emergency medical personnel prepared to board and take Cooper and his wife by ambulance to a nearby hospital.

“I asked her name,” Cooper recalls. “She said her name was Lauren, and she told me she was a radiation oncologist at UC Davis. But she didn’t tell me her last name. She didn’t want any credit.”

The next day, Tait tracked Cooper down at the University of Colorado Hospital in Aurora, Colo.

Kathi Cooper, told her that her husband was experiencing mitral valve regurgitation – a condition in which the mitral valve doesn’t close properly, and blood flows backward into the heart. Doctors also found that he had a blood clot in his right leg. A day later, the couple flew home to Sacramento with instructions to follow up with a cardiologist.

But before he could make the appointment, Cooper wound up back in a hospital with internal bleeding. Doctors at Mercy General in Sacramento treated him for an ulcerated artery and gave him a blood transfusion. Cooper will soon undergo heart surgery to repair the leaky valve.

Late last week, he and Kathi drove from their home in El Dorado Hills to pay Tait a visit at the cancer center, surprising her with a bouquet of fall flowers, and thanking her for helping him through a frightening ordeal. Cooper said he was grateful that his airplane emergency revealed a condition that can be corrected.

“Next time I have an emergency on a plane I hope you’re there,” he joked with Tait.