Are they ‘safe’ tobacco? 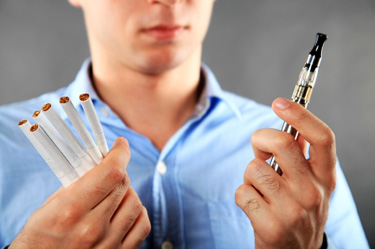 More research on the risks or benefits of e-cigarettes is necessary before they can be recommended as smoking cessation aids.

Michael Schivo has spent much of his career guiding patients on ways to stop smoking cigarettes. Because those efforts often fail, he is always on the lookout for new ways to help.

“I look at smoking as a health problem rather than a personal failure,” said Schivo, who is a pulmonary physician at UC Davis. “There is something about the interaction between the nicotine in cigarettes, the practice of smoking and the chemicals in the brain that make tobacco use extremely hard to stop. I let my patients know that I won’t judge them, that I respect all options and that we’ll work together to help them quit.”

Schivo became curious about cigarette alternatives after some of his patients successfully quit smoking with electronic cigarettes — or e-cigarettes. He led a research review to find out if e-cigarettes, along with cigars, smokeless tobacco and waterpipes, could help smokers reduce their nicotine consumption.

The review showed that snus —  a form of smokeless tobacco from Sweden —  and e-cigarettes could have fewer health risks than cigarettes, although more research on e-cigarettes is necessary.

“Given that waterpipe use has the potential to be the next big tobacco epidemic, education efforts should focus on informing the public of its harms and reducing access among minors.”
— Michael Schivo

“There is a lot of enthusiasm about the potential of e-cigarettes as smoking cessation aids,” said Schivo. “However there simply isn’t enough research yet on their effects on the lungs.”

Other forms of smokeless tobacco, cigars and waterpipes (or hookahs) should definitely be avoided, as they can be addictive and lead to increased nicotine consumption. In fact, waterpipe smoking — which is hugely popular among young people — is potentially more dangerous than cigarette smoking.

Waterpipes provide a smooth and easy-to-tolerate smoking experience, which leads to deeper and longer smoke inhalation that delivers noxious particles to lower portions of the lungs, Schivo explained.

“It doesn’t make sense that a package of cigarettes has warning labels regarding their harmful effects, yet the same warnings do not apply to hookah tobacco,” said Schivo. “Given that waterpipe use has the potential to be the next big tobacco epidemic, education efforts should focus on informing the public of its harms and reducing access among minors.”

For more information, read the press release on Schivo’s review, titled “Non-Cigarette Tobacco and the Lung,” which is available online in the journal Clinical Reviews in Allergy and Immunology.