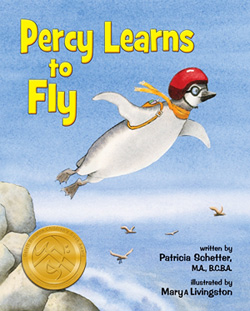 Percy Learns to Fly, a children’s book by Patricia Schetter, project coordinator at the Center for Excellence in Developmental Disabilities at the UC Davis MIND Institute, has received a gold medal for outstanding contributions to children’s literature in the 2013 Gelett Burgess Children’s Book Award competition.

The book was honored in the “motivation and inspiration” award category. Schetter received the medal during a ceremony at the Rowell Family Empowerment Center in Redding, Calif., on Nov. 23.

Schetter said she wrote the book to share a story about discovering children’s differences and recognizing that being different isn’t necessarily a bad thing.

“Differences can be viewed as a gift rather than a challenge,” Schetter said. “We often focus on people’s deficits — what they aren’t able to do or aren’t good at — rather than figuring out what they can contribute, focusing on their strengths and developing their talents.”

The eponymous Percy is a little penguin who grows up in a family of seagulls on Gull Island. Percy and his parents are distressed to find that he has limited success in school because, despite trying his hardest, he is not learning to fly like the other birds. 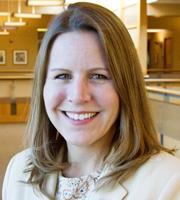 “For some unexplained reason, Percy is hatched into a family of gulls,” Schetter said. “No one ever knows how or why. Of course he goes to school with the other children, but although he has wings and a beak and is clearly a bird, he can’t get the hang of flying no matter how hard he tries or how much he practices.

“He starts to feel very frustrated until, one day, he is accidentally launched into the water and discovers that he really can fly — given the right environment,” she said.

Schetter is the mother of two and lives in Woodland, Calif. She said she is not a children’s book author but was inspired to write Percy because of her work with children with neurodevelopmental disabilities and experiences as the mother of a son with learning differences.

“My son has ADHD and learning disabilities,” Schetter said. “He has struggled with reading and writing. In school that’s how you succeed. By the third grade most of what children are expected to learn is delivered through print. If you struggle with reading, that’s going to be difficult for you. In addition, most teachers assess students’ learning using writing as the output. Again, if writing is not how you best demonstrate what you know, you are at a disadvantage.

Percy Learns to Fly is illustrated by Mary A. Livingston, with educational content and resources contributed by Kandis Lighthall. It is published by ABTA Publications in Redding, Calif. Hardcover and paperback versions are available online and an eBook is planned.

“What I have found with my own son is that I had to trust my own instincts about what kind of environment was best for him, and that it had less to do with an IEP (individualized education plan) or special education services and more to do with the attitudes and beliefs of the people who were in his life,” Schetter said.

“When people focus on his strengths and show him how to use them to compensate for his deficits, he succeeds and feels confident,” she said. “That is what it’s really all about! And I guess that’s what Percy’s about: finding the right environment to showcase a child’s strengths and nurture his talents.”

The Gelett Burgess Awards and Children’s Book Honors Program are conferred by the Gelett Burgess Center for Creative Expression in Portland, Ore., named for artist, poet and humorist Gelett Burgess, author of the poem The Purple Cow and The Goops series of children’s books.