"One Health" initiative advances wellness for humans and animals

Watch a short video about Bean.

Each year, Karen Vernau examines 500 cats and dogs as chief of the Neurology and Neurosurgery Service at the UC Davis Veterinary Medical Teaching Hospital. So what made Bean stand out?

Where do we begin?

Usually, when we hear about translational research, it’s moving from an animal model to the human. In this instance, however, it is the human medical expertise at UC Davis that informs a veterinary case while also providing another example of the university’s One Health initiative, which emphasizes the integration of human and animal medicine to advance the health and wellness of all species.

Bean, a two-year old pit bull adopted by Vernau, is a medical mystery of sorts, beset by a web of afflictions that have challenged UC Davis veterinarians — and their colleagues in biomedical engineering and the School of Medicine — to push the envelope and provide the dog groundbreaking treatment.

Bean also may be the most loveable, grateful, resilient dog on Earth. Many pet owners make similar claims about their cherished animals, but Bean — who has gamely endured eight surgeries and multiple other procedures in her short life — proves the point every day.

Let’s back up to Bean’s first meeting with her UC Davis admirers, which came after her April 2012 rescue by the Humane Society of Silicon Valley. Noting the dog’s stiff, abnormal gait — “like an old man wearing flippers,” Vernau recalls — shelter staff brought her to the veterinary hospital, where an evaluation revealed improperly formed hip joints and neurological troubles.

“But through it all, Bean has just been an inspiration to all of us fortunate enough to care for her. Her will to live, her incredibly kind disposition — considering all she’s been through — it’s amazing and hard to put into words. You just have to meet her.”
— Peter Belafsky, M.D.

Corrective surgery helped, but Bean’s underlying issue was more serious — a form of muscular dystrophy that was also attacking other parts of her body. Within a few months, the gray and white pup was having persistent trouble with regurgitation, the result of a malfunctioning esophagus.

By this time, the Humane Society had determined that Bean was a poor candidate for adoption — and Vernau had fallen in love. So it was that Bean found her new family, which includes Vernau’s husband William, also a UC Davis veterinarian, their two children, and two other dogs.

Landing in the lap of highly trained professionals was a stroke of luck for Bean, as her maladies only multiplied. The persistent regurgitation put her at risk of life-threatening aspiration and pneumonia, and the discovery of a massive hiatal hernia soon led to surgery number two. That brought some relief from her swallowing woes, but it was short-lived, as the muscles in her esophagus refused to effectively move food to her stomach.

Unable to hold on to her meals, Bean grew thin, battled pneumonia, and was plagued by regurgitation episodes that sometimes caused her to choke and pass out. By the fall of 2012, her veterinary team needed help and consulted Peter Belafsky, a renowned UC Davis surgeon and an expert in human swallowing and airway disorders. 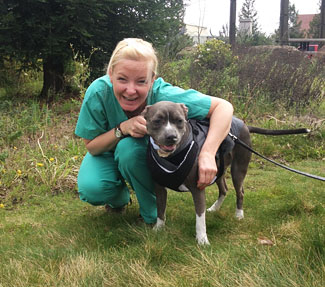 Bean with one of her School of Medicine surgeons, Maggie Kuhn

Belafsky is no stranger to heroic patients; the type of medical interventions he performs — removing vocal chords, performing the world’s second documented larynx transplant, for example — can profoundly affect a person’s quality of life. So it was for Bean, who lost her bark and ability to breathe and swallow like normal dogs.

“But through it all, Bean has just been an inspiration to all of us fortunate enough to care for her,” Belafsky marvels. “Her will to live, her incredibly kind disposition — considering all she’s been through — it’s amazing and hard to put into words. You just have to meet her.”

One of Belafsky’s surgical colleagues on the case, Maggie Kuhn, a clinical fellow in otolaryngology, came away with a similar impression.

“Bean’s resiliency in the face of this life-altering procedure has reminded me that a canine or human creature’s will to live is, in large part, a product of his or her spirit. Optimism and attitude make such a difference in responding to adversity,” Kuhn said.

Bean now breathes through a small hole created in her trachea, or windpipe. But her inability to swallow required the insertion of a permanent feeding tube. That posed a new challenge, because standard adaptors connecting feeding tubes to syringes used to inject the food were too small, causing complications.

Thus began yet another collaboration sparked by Bean, as one of her original veterinarians, gastrointestinal specialist Stan Marks, asked the UC Davis biomedical engineering department if they might design a larger adaptor to simplify the feeding process. Marks, along with Belafsky, oversees the university’s award-winning One Health integrated aerodigestive tract team, which has led to some of the most complicated surgeries ever performed in humans and canines. In Bean’s case, the feeding challenge was met, and the adaptor works so well that engineers are exploring a patent and possible commercial uses.

Today Bean has more good days than bad, and still enjoys destroying soccer balls, watching TV on the couch with the kids, and accompanying Vernau to the vet hospital. There, she has become not only an ambassador of sorts, but also a teaching tool, showing off her tracheotomy and allowing students to experience canine tube feeding. 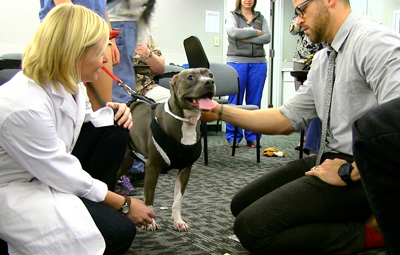 “She loves people, and sometimes she wags her tail so hard she falls on the ground,” Vernau says. “We didn’t intend to go down this path with her, but she just sucked us in.”

So what does it all mean, this story of Bean? Belafsky hopes her indomitable spirit can inspire human patients struggling with the loss of their voice and the need to breathe through a hole in their neck. He envisions a guest membership in the “Lost Cords Club,” which consists of people who've had a laryngectomy and lost the ability to speak and taste.

Marks believes Bean’s multiple health issues spurred collaborations that prompted her UC Davis team “to hone our skills and think outside the box in ways that will help countless other animals and people with similar challenges.”

And Bean? She’s merely grateful for the chance to snuggle and slobber her way through another day.

To learn more about Bean, check out her Facebook page, How is Bean.