A child’s trial and his contributions

Years from now, when Shane Rogers' cancer is in the rear-view mirror and he is cancer-free, his mother Kristen says she won't look back on his treatment period in despair, but with gratitude and hope.

“I had been losing my faith in society,” Kristen Rogers says of the time before her son’s illness. The caring response of her community to her family’s ordeal changed that, she says. Now the Rogers family is paying that compassion forward by helping other families — in two very different ways.

First, the family launched a comfort-and-care program to help children diagnosed with cancer. The family also agreed to participate in a clinical trial that tracks Shane’s treatment side effects so that oncologists everywhere can learn what works best for children of different ages, ethnicities, genders and with other individual characteristics.

“The reason the childhood cancer survival rate is so good now is because so many families agreed to participate in clinical trials,” says Kristen Rogers. “I know how important they are for bettering society. It was a no-brainer.”

“It’s because of families like Shane’s that we are able to move the knowledge forward.”
— Jay Balagtas

According to the National Cancer Institute, 5-year childhood cancer survival rates increased from 58 percent in the mid 1970s to almost 80 percent today. The improvement is due to significant advances in treatment, resulting in a cure or long-term remission for a substantial proportion of children with cancer. Better treatments are the result of pediatric cancer clinical trials, in which a majority of childhood patients participate.

Because of the Rogers family’s participation in a national clinical trial tracking childhood leukemia treatment side effects, Shane’s experience will help inform future treatment protocols for other children with the same illness.

“It’s because of families like Shane’s that we are able to move the knowledge forward,” says Jay Balagtas, assistant clinical professor and Shane’s oncologist at the UC Davis Comprehensive Cancer Center. As the cancer center’s principal investigator of the Children’s Oncology Group (COG), Balagtas oversees pediatric clinical trials offered to UC Davis patients. COG trials allow physicians from throughout the nation to track side effects of various treatment regimens, information that contributes to a massive and useful database.

Shane, who recently celebrated his 9th birthday with more than a dozen friends, will have at least two more years of cancer treatment.

To be sure, Shane has endured many side effects since his 2012 acute lymphatic leukemia diagnosis. In addition to the wrenching bone pain that first sent the 7-year-old to the emergency room, Shane has experienced extreme nausea, hair loss, steroid-induced diabetes, muscle weakness that temporarily confined him to a wheelchair, dehydration, weight loss, confusion and sodium loss.

Shane, who recently celebrated his 9th birthday with more than a dozen friends, will have at least two more years of cancer treatment. Shane lives with his family — mom, Kristen; dad, Sean; and sister, Reese, 4. Shane is back in school but still beset by treatment side effects, including medication-related diabetes. Kristen Rogers chronicles Shane’s journey on a Facebook page called Shane's village. In a recent post, she described how she stayed awake with Shane as he struggled with nausea from extremely low blood sugar.

“As I lay here next to Shane while he sleeps, I can’t help but listen to his every breath,” she wrote. “I want to scream out of frustration, but mostly out of fear... But I am just too tired.”

Through the Facebook page and another website called CaringBridge, the Rogers family also shares expressions of hope and gratitude, messages that in some cases have spread far and wide. Their request for followers to post pictures of themselves holding “Shane, you got this” signs spread quickly. People — even strangers — from around the country and beyond posted photos, including a police chief in Mississippi, a SWAT team that made Shane an honorary member, and a boy in Big Bear who wrote “Shane, you got this” in snow.

Shane’s father, a former Marine, was particularly moved by the picture of an entire Marine platoon in Afghanistan whose members shaved their heads in solidarity with Shane.

“My husband just broke down in tears,” Kristen Rogers says.

The family received a similarly overwhelming response when asking for help moving to a one-story home. Kristen had been carrying Shane up and down stairs to the bathroom and throughout the house because Shane could not walk. She was afraid she would fall and injure him. 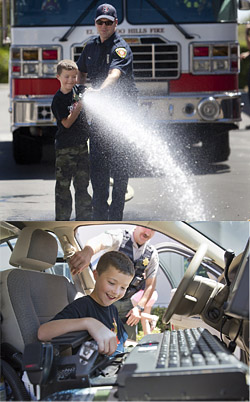 At Shane's birthday party in August, a local sheriff's squad car and a fire truck — both with sirens blaring — rolled up, offering Shane and his friends some hands-on thrills.

Kristen Rogers was stunned when an entire firefighting crew drove up in fire engines, wearing uniforms and bearing offers to help move furniture.

“Shane said, ‘Mom, there are fire trucks here!’” she recalls.

Families from Shane’s school, soccer teams, nearby homes and churches stopped by. A stream of visitors carried boxes from the home and helped pack the truck. At Shane’s birthday party in August, a local sheriff’s squad car and a fire truck — both with sirens blaring — rolled up, offering Shane and his friends some hands-on thrills.

The Rogers family will choose to remember these moments. But Kristen says they won’t forget the difficult times, if only to use them to help other families through their journeys. Kristen Rogers says she barely thought about childhood cancer until a few months before Shane’s diagnosis, when she began following the Facebook page of a young girl with cancer named Jessie Rees who launched a program distributing jars with little treats and toys for sick children. Jessie, who lost her battle with cancer, called them “joy jars.”

“I remember I couldn’t even imagine what it was like for her parents,” says Kristen Rogers. “But in every picture they were smiling.”

Only months later, the Rogers family was facing childhood cancer, too. But through the fear, agony and bewilderment, they endured with the help of the community’s kindness. Now they are giving back.

Through their comfort-and-care program, they raise money to buy new comforters and teddy bears for children in cancer treatment at the UC Davis Comprehensive Cancer Center.

“UC Davis Medical Center has done so much for us, and I want to do something to give back,” says Kristen Rogers. “It is my life’s mission now to be able to tell a family who five minutes ago had been told that their child has cancer that they will smile again.”