Finding true measurement of the skills of people with Down syndrome, fragile X and autism 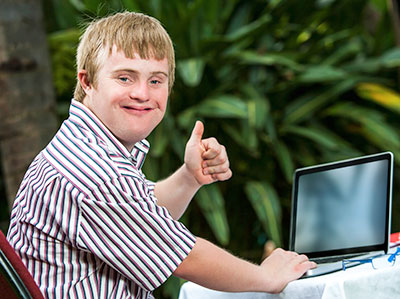 All such tests have a “floor” — a point beyond which the test is not able to measure cognitive functioning below a given level, usually an IQ of around 40 points.

But many people with intellectual disability, such as those with Down syndrome, fragile X syndrome and autism spectrum disorder (ASD), have scores that may be lower than the floor. Establishing a floor for an individual’s intelligence levels, or flattens, the profile of test scores among people with intellectual disability, which may eliminate the opportunity to fully appreciate their actual strengths and weaknesses.

That is the finding of innovative research by the UC Davis MIND Institute, which seeks to offer a different, validated approach to the assessment of intelligence in individuals with intellectual disabilities.

“The results of the study provide evidence of the extent of the floor-effect limitations on IQ assessments in individuals with intellectual disabilities, and highlight a validated method for improving measurement sensitivity in a relatively large proportion of these individuals,” said David Hessl, UC Davis professor of psychiatry and behavioral sciences and the study’s senior author.

Hessl and his colleagues examined the scoring method employed by a widely used test of intellectual abilities, the Stanford-Binet Intelligence Scales, Fifth Edition, or SB5, which is used to evaluate the level of global intellectual functioning among individuals with neurodevelopmental disorders.

“But this method does measure IQ below the floor, and It measures it in a sensitive way.”
— David Hessl

The Stanford-Binet measures a range of intellectual skills, including verbal and non-verbal fluid reasoning; knowledge; quantitative reasoning; visual-spatial processing; and working memory. The cumulative scores across these domains together make up an individual’s intelligence quotient, or IQ.

The study included a diverse population of 311 largely male individuals with a diagnosis of ASD or fragile X syndrome between the ages of 3 and 38 years. All of the study participants had an intelligence score that fell below 70 points. Individuals with fragile X syndrome were recruited through clinical programs of the UC Davis Fragile X Research and Treatment Center at the MIND Institute and at Rush University Medical Center in Chicago. Data from participants with ASD came from the Autism Genetic Resource Exchange.

The authors’ novel method involves using participants’ raw intelligence scores and calculating “deviation scores,” using an algorithm that determines more precisely how their performance deviates from that of children in the general population.

“For people with an intellectual disability, such as autism, fragile X syndrome or Down syndrome, a very high percentage may have a cumulative (or Full Scale) IQ that is below what the test can measure,” Hessl said. “But a floored score doesn’t tell you anything about their true abilities.”

“But this method does measure IQ below the floor, and it measures it in a sensitive way,” he said.

Having more sensitive approaches to assessing the intellectual capacities of people with intellectual disorders is important because revealing an individual’s strength and weaknesses can contribute significantly to their success in school, for example.

“A child placed in a new special education classroom may be given the Stanford-Binet IQ test and obtain a floored score showing no variation in performance, which would give the impression that he is simply low functioning and has no real cognitive strengths or weaknesses.” Hessl said. “But if our scoring method is used, you are likely to find that particular verbal skills are relatively better, or there are unique visual spatial strengths, and that might help you to better serve his needs.”

“Also, in research, most studies of neurodevelopmental disorders use IQ tests to characterize their participants or to measure their improvement over time in the context of treatment. If a child scores at the floor of a test, it is unlikely to be useful in providing an accurate cognitive description or in measuring change over time. The “deviation” scoring method would allow for a more precise measurement, enabling the investigator to detect individual differences and cognitive changes.”

Lead study author and Graduate Student Researcher Stephanie Sansone agrees. "More accurate assessment is an important means of informing and improving clinical research and diagnosis and better characterizing cognitive outcomes," she said. "This approach helps to address some of these limitations, but there is still work to be done."