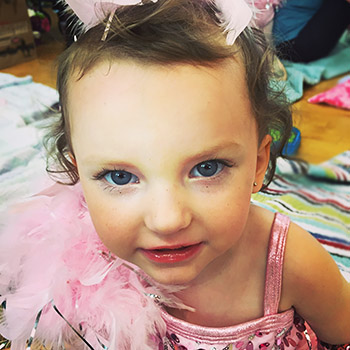 Lily, a few weeks before she was diagnosed with high-risk B acute lymphoblastic leukemia.

Lily Chiquet is a rough-and-tumble 3-year old who loves the color orange, Mickey Mouse and playing with her older sister, Charlotte.

Last summer, the Chiquet family drove from their home in Lincoln to Los Angeles for a vacation. To celebrate Lily’s third birthday, Michelle and Sean Chiquet took their daughters to Disneyland. Little did they know that they would be in the emergency room 24 hours later, nor could they have ever imagined that tests would reveal that Lily had leukemia.

This is Lily’s story.

Day at the happiest place on Earth ends with trip to ER, leukemia diagnosis

After spending the day at Disneyland, Lily pointed out tiny red dots all over her arm that weren’t there earlier in the day. The dots, her family would later learn, were known as petechiae, or very small blood vessels that have leaked or bled.

Michelle and Sean Chiquet took her to the closest hospital emergency room, where staff ordered Lily’s blood work and then transferred her to the local children’s hospital. After being admitted to the children’s hospital, that afternoon she was diagnosed with leukemia, a type of cancer that forms in the body’s blood cells and bone marrow. It is the most common childhood cancer in children ages 2 to 4. 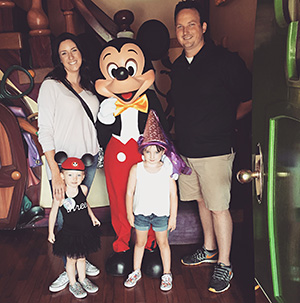 The Chiquet family celebrates Lily’s third birthday at Disneyland, the day before she was diagnosed with leukemia.

Lily's mother recalled that back in April, Lily had some mysterious bruises on her legs and head.

“Since Lily was a toddler and by definition active and clumsy, her pediatrician told me to keep an eye out for any other bruising, especially any that showed up on her back or torso,” Michelle Chiquet said.

A week before the Chiquets left for Disneyland, Lily got a bruise on her spine. Michelle made an appointment with Lily’s pediatrician for an examination and to have bloodwork done after their Disneyland trip. Instead, Lily’s bloodwork from the children’s hospital revealed high-risk B acute lymphoblastic leukemia (ALL), a cancer that started in her B cells. Normal B cells, also known as B lymphocytes, help the body’s immune system fight infection.

According to the National Cancer Institute, ALL is a type of leukemia that attacks quickly and is fast growing. Patients with ALL have too many lymphoblasts – or immature white blood cells – in the blood and bone marrow. These immature cells do not act like healthy lymphocytes and are not able to fight infection as well, which can quickly lead to infection.

UC Davis Comprehensive Cancer Center’s pediatric oncology program is a member of the Children’s Oncology Group (COG), a federally funded cooperative that performs clinical research and is dedicated to the treatment of childhood cancers.

With her weakened immune system, Lily also had an E. coli infection and needed to spend a few days at the children's hospital in Los Angeles before she could be transferred to UC Davis Children’s Hospital for cancer care.

The group’s first plane had mechanical problems, so Lily, Michelle, Dawn and Courtney waited in an airport lounge for more than two hours until the second plane arrived from Sacramento. To pass the time and keep a sick 3-year-old entertained, Courtney and Dawn played music and movies for Lily, watched planes take off and brought out medication stickers, scissors and beads for crafting.

“We took what could’ve been a frustrating situation for both the mom and patient and created a therapeutic environment in the airport waiting room,” Harbour said. “It was a blessing and a gift to be able to care for her and provide fun in a difficult situation.”

Advances lead to a new normal for childhood leukemia patients 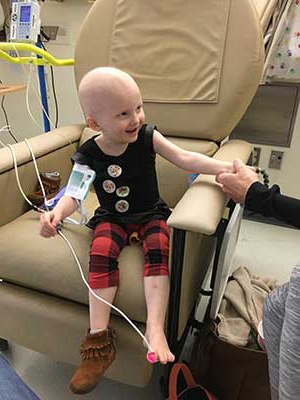 Though Lily’s leukemia diagnosis means she is often at UC Davis Children’s Hospital or the Comprehensive Cancer Center for treatment, she is still all smiles.

Lily’s leukemia treatment is expected to last more than two years. She is in the beginning stages, with three more rounds of intense chemotherapy before moving on to a maintenance level of treatment.

However, her prognosis is very good, according to her doctor, Anjali Pawar, associate clinical professor of pediatric hematology and oncology at the UC Davis Comprehensive Cancer Center and UC Davis Children’s Hospital.

“In the 1960s, the five-year survival rate for childhood acute lymphoblastic leukemia — or ALL — was less than 10 percent,” Pawar said. “But because of treatment advances and successful clinical trials that began in the 1970s, the survival rate is now up to about 90 percent.”

Pawar said that Lily has responded well to treatment so far, in part because of her upbeat personality.

“A big part of that comes from having wonderful family and social support,” Pawar said.

Though Lily is often at the doctor’s office, in the hospital or at the cancer center’s pediatric infusion room for treatment, she’s there with a smile on her face.

“It’s normal for her because she doesn’t really remember what things were like before,” Michelle Chiquet said.

When Lily is admitted to UC Davis Children’s Hospital, she plays with Charlotte, her toys and participates in activities — like the Mini Marathon and music therapy — organized by the Child Life and Creative Arts Therapy Department.

“We have been more than happy with everything at UC Davis,” Michelle Chiquet said. “She has a few more months of intense chemotherapy, and even though this has been a long, hard journey, we are grateful that she is doing so well — and that is thanks to all of her amazing doctors and nurses.”