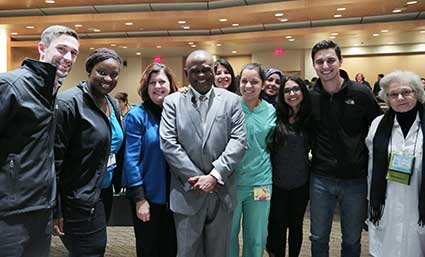 Dr. Omalu poses with medical student fans and faculty after his inspirational talk.

In a Grand Rounds presentation, hosted by the Department of Pathology and Laboratory Medicine Feb. 1, clinical pathology professor and celebrated neuropathologist Bennet Omalu spoke to UC Davis medical students and guests about his challenges, successes and best Hollywood moments while making “Concussion,” a new film depicting his life and work in bringing worldwide attention to chronic traumatic brain injury.

In a lively and candid talk, titled “What a Pathologist Can Learn from Hollywood: Dr. Omalu’s Experience,” Omalu described how he convinced producer Ridley Scott to make the movie, built a friendship with the film’s star Will Smith, and learned the the fine art of navigating the Hollywood environment, which depends a lot on knowing how to select the right shirt and hone the perfect “signature smile,” he added playfully. Every experience was valuable, he said, and taught him unforgettable lessons.

“This movie was made not because I was exceptional but because I presented myself well,” Omalu began, highlighting the importance of personal branding. “I presented myself sincerely and transparently and placed everyone I met above me,” he said, which helped him convey the legitimacy and importance of his story. “And I always wore a suit on set,” he added, encouraging students to present themselves well to patients. “Packaging matters. It’s what gives you a competitive advantage.”

“Discover who you are, use yourself to build up other people, and you’ll become whatever you want in life.”
— Bennet Omalu

Another key lesson was the extent to which the movie makers sought perfection, putting in nearly 24-hour work days, shooting 20 to 25 shots per scene and holding long group discussions around the autopsy table to decide on the perfect camera angle. “It’s mind-boggling,” he said, mentioning Will Smith’s 35-suit wardrobe and perfectly matched cufflinks, which the costume director spent hours selecting. “Perfection is routine for them,” he learned, and was particularly impressed by Will Smith’s personal dedication to excellence. “He spent a lot of time with my family so that he could transform himself into my life,” he said, and was “so deeply focused” studying Omalu’s autopsies in order to portray the work flawlessly in the movie. Omalu admonished future physicians to value perfection like Hollywood and to pay attention to detail. “The world will be a better place,” he said.

Always give to a team

Omalu ended his talk encouraging attendees in the packed auditorium to be active contributors to a team and to look for opportunities to enrich and enhance each other, to “make others feel good about themselves,” he said, inspired by the comradery and teamwork of crew members he met on set. “Discover who you are, use yourself to build up other people, and you’ll become whatever you want in life.” 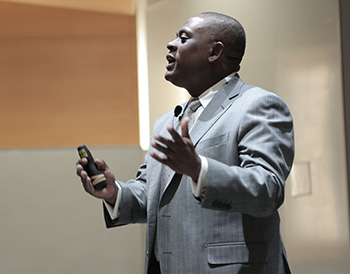 With more than 200 guests in attendance, Omalu’s presentation was very well received. A long line for photos, autographs and one-on-one chats quickly formed as soon as the professor finished speaking.

With more than 200 guests in attendance, Omalu’s presentation was very well received. A long line for photos, autographs and one-on-one chats quickly formed as soon as the professor finished speaking.

“It’s been a treat every time I get to hear him speak,” said medical student Paul Delgado, who feels lucky that Omalu is part of UC Davis and provided valuable advice for the transition from school to the professional world.

Other guests appreciated Omalu’s humor and personable approach. “He puts his humanity before his technical knowledge, and it’s very refreshing,” noted Omar Sahak.

In a career field where students often feel pressured to “be selfish and focus on standing out in order to make it in medicine,” according to student Rohini Jain, Omalu’s emphasis on the value of interconnectedness resonated with many.

“It’s was very inspiring,” said Viviana Ruiz, a fourth-year student pursuing a career in anesthesiology. “I love the idea that we’re all connected and can make our lives and our profession better by contributing to each other.”