A lifesaving resource that doesn't have to go to waste

The umbilical cord and placenta that nourish the fetus throughout a mother’s pregnancy is usually discarded as medical waste. However, thanks to a statewide program coordinated by UC Davis Health System, cord blood can be donated and stored at no cost to the donor so its treasure trove of lifesaving elements is available for the public good. 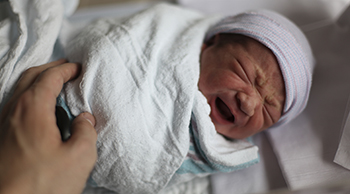 Mothers are now able to donate their newborns’ umbilical cord blood and have it publicly banked at no cost.

Through the California Umbilical Cord Blood Collection Program, UC Davis is playing a leading role in expanding the lifesaving opportunities of otherwise-discarded cord blood units. The program is building up the inventory and diversity of publicly available cord blood units in California and beyond as part of the state’s first comprehensive public collection system.

“Due to our state’s ethnic diversity, California is an ideal place to focus on enhancing cord blood collection,” said Jon Walker, co-director of the Sacramento-based collection program. “A more varied pool increases the likelihood that members of minority groups and mixed heritage can find a match and have access to lifesaving treatments.”

Cord blood donations are particularly important for ethnic minorities. African-Americans, Hispanics and Asians each make up a smaller portion of the U.S. population – meaning fewer donors are available – and they can also have a greater degree of genetic variation. Because a partial match is acceptable with cord blood, it allows more minority patients to find a suitable unit for treatment.

California’s collection program is not a cord blood bank itself. It simply collects cord blood and sends it to public banks. Mothers are now able to donate their newborns’ umbilical cord blood and have it publicly banked so it is available to anyone who needs it for a lifesaving transplantation.

Cord blood is now considered a treatment for the same conditions indicated for bone marrow transplantation, but with several advantages:

Additionally, the university is helping turn donated cord blood units that can’t be used in direct clinical care into versatile stem cell lines for research into a wide range of potential therapies.

We’re very thankful for all our donor mothers for their eagerness to participate in this program that’s free to families.
— Suzanne Pontow

To date the UC Davis-led effort has more than tripled the number of hospital sites statewide that collect cord blood. More than 1,200 units from the program are now listed on the National Marrow Donor Program’s public registry, and 21 have been selected for transplantation.

“Saving lives with California’s diverse cord blood units is the most effective way to measure our growing success,” said Suzanne Pontow, a UC Davis scientist who co-directs the state collection system. “We’re very thankful for all our donor mothers for their eagerness to participate in this program that’s free to families.”