As the youngest of three children and a multi-sport athlete, Hunter David of Woodland is used to going to battle. But his competitors are usually his siblings or other 12-year-old boys playing basketball, baseball or football, not a mysterious illness. In the summer of 2015, the normally active Hunter became lethargic and began inexplicably vomiting and losing weight.

Hunter started off summer by getting sick. His parents, Timm and Lori, chalked it up to the excitement of his last day of school and dehydration from playing outside in the June heat. But a few weeks later, Hunter was in a baseball tournament in Nebraska, and instead of swimming with his friends in the hotel pool, he chose to nap each day.

When he returned home, Hunter’s parents called his pediatrician. An initial round of bloodwork and tests, including an MRI of his stomach, showed nothing abnormal. He began taking antacid medications and felt a bit better. Two days later, however, Hunter was vomiting again, and his parents took him to the local emergency room. Hunter had lost eight pounds and was so dehydrated, the emergency room nurse could hardly get an IV in. 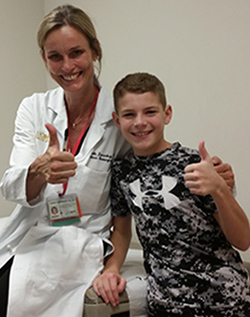 “The doctor did a brain scan and, 30 minutes later, he told us, ‘He has a brain tumor,’” Timm David said. “They immediately put Hunter in an ambulance and sent us to UC Davis Children’s Hospital.”

When Hunter arrived at UC Davis, he was admitted to the pediatric intensive care unit and immediately given steroids to help limit the swelling in his brain. The tumor was located on his cerebellum, near the back of his neck, which controls movement and balance. Until he had surgery to remove the brain tumor, doctors could not be certain if it was cancerous or not. The Davids were told that Hunter had a 50-50 chance of the tumor being malignant, or cancerous. Each year, about 4,000 kids in the U.S. are diagnosed with a brain tumor, 50 percent of which are non-cancerous, or benign.

Hunter moves past battle with tumor, back to competing in sports

On July 14, Marike Zwienenberg, pediatric neurosurgeon at UC Davis Children’s Hospital, operated on Hunter and diagnosed him with pilocytic astrocytoma, a type of brain tumor that typically occurs in children and young adults under 20. When the tumor can be removed completely, the chance of recurrence is small, and the long-term prognosis is excellent. Hunter’s entire tumor was removed.

While doctors had identified the type of tumor Hunter had, they would not know whether the tumor was cancerous until the results of the biopsy came in a week after surgery.

“I cried when we learned it wasn’t cancer,” Timm David said. “It was such a big relief.” 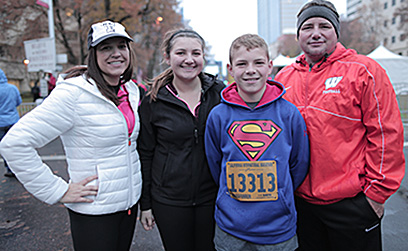 Hunter David, who had surgery to remove a pilocytic astrocytoma brain tumor, poses with his mom, Lori, sister, Madison, and dad, Timm, at the 2015 California International Marathon MaraFUNrun in Sacramento.

Hunter stayed in the hospital for about 10 days as he recovered from surgery and gastroparesis, a condition in which the spontaneous movement of the stomach muscles is impaired causing nausea and vomiting. While the cause of gastroparesis is unknown, it was successfully treated with medication.

Hunter is now in seventh grade and back to playing sports. Because he was so sick from the tumor and recovery, Hunter lost 20 pounds from his 94-pound frame. He is now up to 103 pounds and feels great. In November, Hunter was able to join his football team for three playoff games. In December, he ran the 2.62-mile California International Marathon MaraFUNrun in Sacramento. He also made his school’s basketball team as the starting point guard, and recently found out that he made an all-stars baseball team.

“I was very impressed with him returning to sports just a few months after his surgery,” Zwienenberg said. “I’m glad that he has done so well, and I hope to attend one of his games soon.”

On St. Patrick’s Day, he had a follow-up MRI and was given the good news that there was no recurrence of the tumor.

“He’s stronger now than he’s ever been,” Timm David said.