Who should - and who shouldn't - take daily aspirin

It's important to heart and vascular health, but only for some 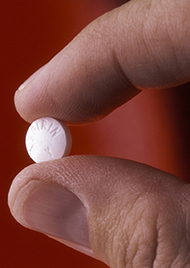 Aspirin, once used only to reduce fever, aches and pains, is now taken by many like a daily vitamin to promote heart and vascular health. But is this wise? And if you are not currently taking aspirin each day, should you? Here is guidance from Ezra Amsterdam, a cardiologist with UC Davis Health System.

Aspirin reduces certain prostaglandins, hormone-like substances in the body linked with inflammation. They also stop platelets in the blood from sticking together and forming clots, reducing the risk of strokes and heart attacks caused by clots in coronary arteries or blood vessels in the brain.

Aspirin, however, isn’t well tolerated by everyone. Reducing the clumping action of platelets may cause internal bleeding, especially in the gastrointestinal (GI) tract, in some people. In individuals with aspirin allergy, the drug can trigger asthma attacks. As a result, the U.S. Food and Drug Administration does not recommend aspirin for preventing a first heart attack or stroke.

Who should take aspirin

The greater the risk for a heart attack or stroke, the more likely the benefits of aspirin will outweigh the risks. Risk is highest in those who have had a heart attack, ischemic stroke (caused by a clot) or TIA (so-called “mini” or “warning” stroke), and doctors usually advise daily aspirin for these individuals to help prevent a second event. Aspirin is also standard therapy in patients who have had a stent placed in a coronary artery.

Those who cannot tolerate aspirin’s side effects may be asked to try enteric-coated aspirin instead, add a proton pump inhibitor (PPI) to reduce GI symptoms or substitute clopidogrel (Plavix), which also reduces blood clots.

Those who should avoid aspirin

In addition to those who develop GI bleeding or who have an aspirin allergy, there are others who should not take aspirin:

Daily aspirin therapy can save lives but, because of the risks, do not start a daily regimen without consulting first with your physician.

Daily aspirin therapy can save lives but, because of the risks, do not start a daily regimen without consulting first with your physician. Also discuss the best daily dosage for you, which can range from 81 mg to 325 mg a day.

Reduce your risk of heart disease