Exercise helps the brain, too

Amanda Berry exercises most days of the week for many reasons.

“Being active makes your health, your outlook and all things in life better.”

“It goes beyond making sure my clothes fit well,” Berry said. “Being active makes your health, your outlook and all things in life better.”

So when UC Davis, where Berry works for the Behavioral Health Center of Excellence, was recruiting for a new study on how exercise affects the brain, she volunteered.

“I know it works,” Berry said, “but I wanted to help find out why.” 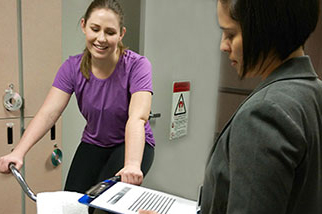 The research was led by Richard Maddock, a professor of psychiatry and behavioral sciences who specializes in treating mood and anxiety disorders. The study that included Berry focused on two neurotransmitters — glutamate and gamma-aminobutyric acid, or GABA — that help regulate physical and emotional health.

“Major depressive disorder is often characterized by depleted glutamate and GABA, which return to normal when mental health is restored,” Maddock said. “We wanted to know if exercise could speed that restoration process.”

Maddock and his team evaluated magnetic resonance imaging (MRI) scans of the brains of 32 healthy volunteers who vigorously exercised on a stationary bicycle, and a smaller control group who didn’t exercise at all.

They used a type of MRI scan that can measure neurotransmitter levels in the brain, and they found that brain glutamate and GABA levels increased in the participants who exercised, but not among the non-exercisers. Significant increases were found in the visual cortex, which processes visual information, and the anterior cingulate cortex, which helps regulate heart rate, some cognitive functions and emotion.

Working toward an exercise Rx

While glutamate and GABA declined once exercise stopped, there were longer-lasting effects. 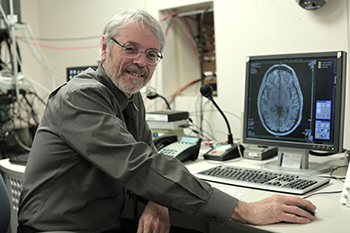 “There was a correlation between the resting levels of glutamate in the brain and how much people exercised during the preceding week, leading us to believe that increased neurotransmitter levels may be associated with the sustained mental health benefits of exercise,” Maddock said.

He now hopes to test whether less-intense activity, such as walking, offers similar benefits. He would also like to use the exercise-plus-imaging method on a study of patients diagnosed with depression. His ultimate goal is to develop detailed guidelines that physicians can use in prescribing types and levels of exercise that offer the greatest benefits for patients with neuropsychiatric disorders.

“It was exciting to be a part of this process,” Berry said. “Exercising for physical health might seem like a ‘no brainer,’ but now there is data that shows that exercise should be part of a mental health plan as well.”

This is your brain on exercise

Weighing the pros and cons of mental health apps